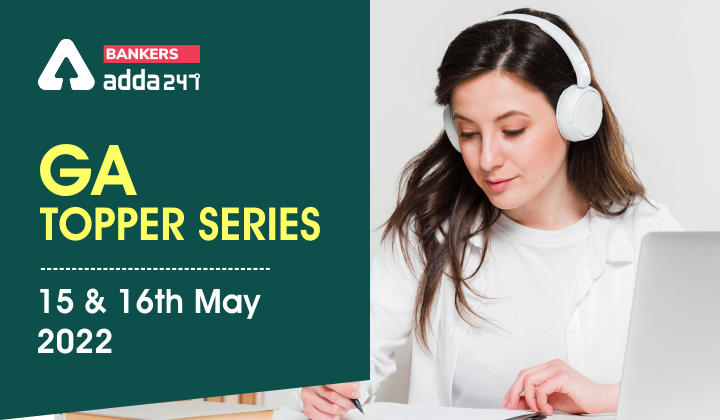 GA Topper Series: 15th & 16th May 2022: Hello Students, all those students who have cleared their prelims exams in the banking sector must be prepared with every topic in the General Awareness Section for the mains examinations. Bankersadda team has brought you up a new series in which we will come up with 10 questions with the correct answer and the detailed solution to the question.

Q1. From which country does Sheikh Khalifa bin Zayed Al Nahyan belong and what is the currency of his country?

Q2. Lionel Messi topped the list of Forbes’s highest-paid athletes. Which of the following players do not belonged to his sport?

Q3. How much money does the Indian government contribute to the hindi@ UN project?

Q4.Ministry of agriculture and farmers welfare signed an MOU with UNDP for technical assistance of which government schemes?

Q5. Which ministry signed an MOU with Amazon for online marketing of SHG’s products?

(a) Ministry of rural development

(b) Ministry of Panchayati raj

Q6. In which year and where is the headquarters of the International shooting sports federation?

Q7. Which organization has agreed to launch an Early warning system for large scale pandemics?

(d)all of the above

Q8. How many lines of credit are given to SBM (Mauritius) by EXIM bank and for what purpose in may?

Q9. The Northern Ireland Protocol is a point of tension between which two parties?

Q10. What is the meaning of a marsquake?

(a) A  process to make the covid vaccine

(b) A disease of marsupials

(c) A explosion between two galaxy

Lionel Messi has topped the list of Forbes Highest-Paid Athletes 2022 with a reported income of $130 million, followed by Basketball player, Lebron James with $121.2 million while Cristiano Ronaldo was third with $115 million.

Rafal nadal is a tennis player

The government of India has contributed USD 800,000 to the United Nations(UN) as part of the initiative which aims to enhance public outreach of the organisation in Hindi.  The project was launched by India in 2018

There are six official languages of the UN. These are Arabic, Chinese, English, French, Russian and Spanish.

The Ministry of Agriculture and Farmers Welfare (MoAFW) of the Government of India (GoI) and the United Nations Development Programme (UNDP) have signed a Memorandum of Understanding (MoU) under which the UNDP will provide technical assistance to two GoI schemes: Pradhan Mantri Fasal Bima Yojana (PMFBY) and Kisan Credit Card-Modified Interest Subvention Scheme (KCC-MISS)

Amazon India signed an MoU with Karnataka State Rural Livelihood Promotion Society (KSRLPS) to support the growth of women entrepreneurs. Amazon India will launch ‘Sanjeevini-KSRLPS’ in its platform and extend benefits of the ‘Saheli’ Programme

Jeff Bezos, who established Amazon exactly 27 years ago on July 5, 1994, has stepped down as CEO, and Andy Jassy, has taken over as the company’s new CEO.

The Export-Import Bank of India (Exim Bank) has entered into an agreement with the SBM (Mauritius) Infrastructure Development Company Ltd. (SBMIDCL) to provide the latter with a USD 190 million Government of India (GoI)-backed Line of Credit (LoC). For Metro Express Project and other infrastructure projects in Mauritius

The Northern Ireland Protocol is becoming a point of tension between the European Union (EU) and the United Kingdom (UK).

NASA recently announced the detection of the quake on Mars, called marsquake through the insight Mars lander. The mission was launched in May 2018 and was successfully landed on Mars in November 2018. Since then it has detected 1,313 quakes.