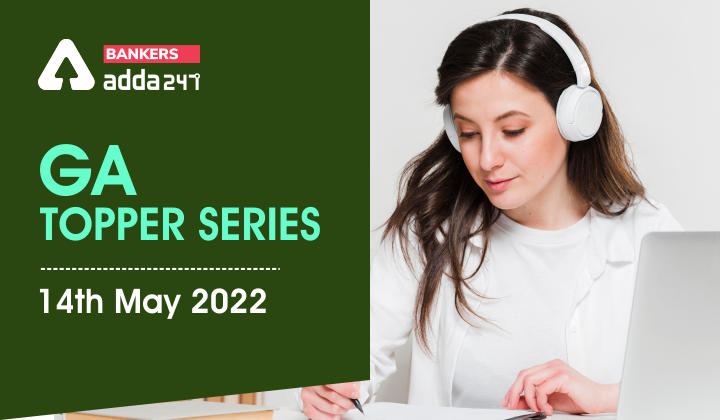 GA Topper Series: 14th May 2022: Hello Students, all those students who have cleared their prelims exams in the banking sector must be prepared with every topic in the General Awareness Section for the mains examinations. Bankersadda team has brought you up a new series in which we will come up with 10 questions with the correct answer and the detailed solution to the question.

Q1. Till which date does the PM Garib Kalyan Anna yojana extend, with how much additional amount of money?

Q3. Under which article of the constitution president appoints the chief justice of the high court?

Q4. Who received the first Templeton Prize in 1973?

Q5 Red shield centre for excellence and wellness is established in which state by Indian army?

Q6. Which state has launched the Udyam Kranti Yojana scheme?

Q7. Which of the following reports is not published by the World Economic Forum?

The PM-GKAY scheme’s Phase-V was set to finish in March 2022. Launched in April 2020, making it the world’s largest food security programme.

So far, the government has spent over Rs. 2.60 lakh crore, with another Rs. 80,000 crores set to be invested over the next six months through September 2022, bringing the total expenditure under PM-GKAY to roughly Rs. 3.40 lakh crore.

Tamil Nadu Chief Minister M.K. Stalin has launched the ‘Meendum Manjappai’ scheme to promote the use of cloth bags by the public and discourage the use of plastic bags.

CM Shivraj Singh Chouhan will launch the Udyam Kranti Yojana. Loans ranging from Rs. 1 lakh to Rs. 50 lakh would be offered to youth under this scheme for self-employment

Ease of doing business is published by the world bank.

The United Nations General Assembly (UNGA) in March 2022 passed a resolution to mark May 12th as International Day of Plant Health (IDPH) to raise awareness regarding the safety of plants and the importance of protecting plant health.

The year 2020 was declared as International Year of Plant Health (IYPH) by the United Nations (UN). However, the IYPH was extended till 1 July 2021 to complete the pending activities, which were severely disrupted by the coronavirus pandemic