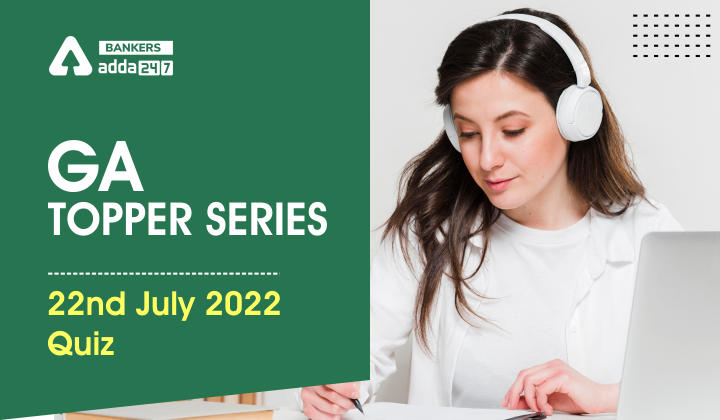 GA Topper Series: 22th July 2022: Hello Students, all those students who have cleared their prelims exams in the banking sector must be prepared with every topic in the General Awareness Section for the mains examinations. Bankersadda team has brought you up a new series in which we will come up with 10 questions with the correct answer and the detailed solution to the question.

Q1. Karnataka , Manipur and Chandigarh topped the 3rd edition of NITI Aayog’s India Innovation Index. Who is the Chairman of NITI Aayog ?

Q2. Who is the chairperson of IBBI?

Q3. Narsinbhai Patel , a freedom fighter passed away. He participated in which movement?

(a) Battle of Plassey

Q4. Who is appointed as Managing Director of Rattan India Power?

Q5. ISRO is in the process of developing indigenous capabilities towards space tourism through the demonstration of human space flight capability to which Orbit?

Q8. RBI Has formulated a regulatory structure for UCBs to strengthen their financial resilience. It is of how many tiers ?

Q9. As there are 4 tier in UCB Regulatory Mechanism. What is the range of tier III for deposits with UCB?

Central Government has appointed, Jayanti Prasad as a Whole-time Member of the Insolvency and Bankruptcy Board of India (IBBI) for five years. This period of five years will be counted from the date of assumption of charge of the post i.e July 5, 2022, or up to the age of 65 years, whichever is the earliest, according to an executive order issued by the Ministry of Corporate Affairs (MCA).

Freedom fighter and the only last witness of Dandi Kutch Narsinhbhai Patel has passed away at the age of 102.

Avinash Kulkarni, has been chosen to head the India Debt Decision Firm (IDRCL).

ISRO is in the process of developing indigenous capabilities towards space tourism through the demonstration of human space flight capability to Low Earth Orbit (LEO).

Emergency Response Support System (ERSS): It is a Government of India (GoI) initiative to integrate an emergency response system with a single emergency number 112, to address different emergencies of citizens. ERSS address all emergency signals received from citizens through voice call, SMS, e-mail, panic SOS signal, ERSS web portal etc. A mobile App called ‘112 India’ is introduced by Govt. of India, to quickly raise a request for help when a person is in emergency, by pressing a button to send alert messages with location data and make emergency call to 112. Previous emergency numbers like 100 (police), 101 (Fire and Rescue) and 108 (ambulance), 181 (Woman and Child Care) etc. are integrated with the unified number 112.

According to the Biotechnology Industry Research Assistance Council’s (BIRAC) report titled, India BioEconomy Report 2022, India’s bioeconomy is likely to touch USD 150 billion by 2025 and over USD 300 billion by 2030

Reserve Bank of India (RBI) prescribed the following four-tier regulatory structure with differentiated regulatory prescriptions for urban cooperative banks (UCBs) to strengthen their financial resilience, and to enhance their ability to fund their growth

Tier-I: All unit UCBs and salary earners’ UCBs, irrespective of deposit size, and all other UCBs with deposits of up to Rs100 crore

The differentiated regulatory approach was mainly recommended for key parameters such as net worth, Capital to Risk-weighted Assets Ratio (CRAR), branch expansion and exposure limits.

Net Worth: RBI has stipulated a minimum net worth of Rs 2 crore for Tier-I UCBs operating in a single district and Rs 5 crore for all other UCBs of all tiers.