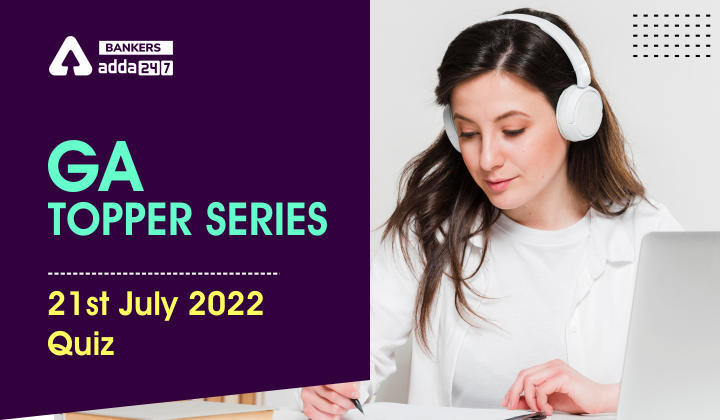 GA Topper Series: 21th July 2022: Hello Students, all those students who have cleared their prelims exams in the banking sector must be prepared with every topic in the General Awareness Section for the mains examinations. Bankersadda team has brought you up a new series in which we will come up with 10 questions with the correct answer and the detailed solution to the question.

Q2. Who has been elected as the president of Srilanka?

Q4. On which river of India blackbuck survey is going to be done?

Q5. Who has written the book : Beyond the misty veil, temple tales of uttarakhand?

Q6.Which social media site has started the feature of “ Payments in chat”?

Q7. Due to the lender’s worsening financial situation, the RBI imposed a number of limitations on Mumbai-based Raigad Sahakari Bank, including a withdrawal cap of Rs ______per customer.

Q8. DBS Bank has been recognized as the ‘World’s Best SME Bank’ by Euromoney. What is the full form of DBS?

(a) Disinvestment Bank of Singapore

(b) Developed Banking of Singapore

Q9. The National Academy of Agricultural Research Management (NAARM) has bagged the Sardar Patel Outstanding ICAR Institute Award 2021. It is situated in which city?

Q10. Who has been appointed as ethics officer and ombudsman of BCCI?

Tamil Nadu tops the list of states so far as utilisation of funds under the government’s flagship Smart City Mission is concerned. While Tamil Nadu has spent over Rs 3932 crore out of the Rs 4333 crore released by the Centre, Uttar Pradesh is in the second position with the utilisation of Rs 2699 cr out of the Central share release of Rs 3142 crore. As on 8 July 2022, the Centre has released Rs 30,751.41 crore for 100 Smart Cities, out of which Rs 27,610.34 crore (90%) has been utilised.

Time’s Magazine releases a list of the World’s greatest places of 2022, Kerala and Ahmedabad are in the top 50

Madhya Pradesh wrote history as they won their maiden Ranji Trophy title, beating tournament heavyweights Mumbai by 6 wickets in the final at the M.Chinnaswamy Stadium in Bengaluru.

Veteran Sri Lankan politician and six-time Prime Minister, Ranil Wickremesinghe has been elected as the 9th President of the Island nation by the Parliament.

Two-time Grand Slam champion and former world number one, Lleyton Hewitt was inducted into the International Tennis Hall of Fame

Michelle Poonawalla has received the Shiromani Award at NRI World Summit 2022 in the United Kingdom for her contribution to the field of art.

In order to create a conservation strategy to safeguard the endangered species, the Andhra Pradesh State Wildlife Department has begun the first-ever study of blackbucks along a length of islands in the Godavari between Dowleswaram and Yanam. Following reports of large numbers of blackbucks becoming stuck on the islands affected by the Godavari floods, the survey was proposed.

Retired Army officer Raj Shukla has been appointed as a member of the Union Public Service Commission (UPSC).

Meta CEO Mark Zuckerberg announced that the company is launching a new “payments in chat” feature on Instagram. With this new feature, users can purchase products from small businesses and track orders via direct messages on Instagram.

Due to the lender’s worsening financial situation, the RBI imposed a number of limitations on Mumbai-based Raigad Sahakari Bank, including a withdrawal cap of Rs 15,000 per customer. The cooperative bank is subject to a number of restrictions, including the inability to issue loans, make any investments, or take new deposits without RBI‘s prior approval.

DBS Bank has been recognized as the ‘World’s Best SME Bank’ by Euromoney for the second time (the first time in 2018). Development Bank of Singapore Limited is the fullform

Former Supreme Court judge, Vineet Saran has taken over as the Board of Control for Cricket in India (BCCI) ethics officer and ombudsman. He has succeeded Justice (Retd) D. K. Jain, whose term ended in June last year.