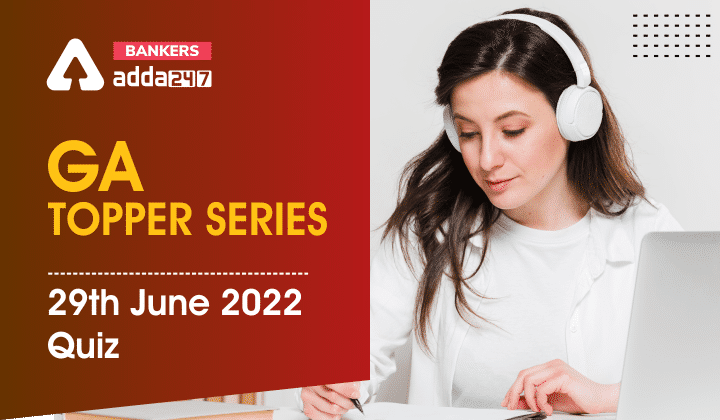 GA Topper Series: 29th June 2022 Quiz: Hello Students, all those students who have cleared their prelims exams in the banking sector must be prepared with every topic in the General Awareness Section for the mains examinations. Bankersadda team has brought you up a new series in which we will come up with 10 questions with the correct answer and the detailed solution to the question.

Q1. When Goods and Services Tax (Compensation to states) Act was enacted?

Q2. What is the limit for the UPI payment option to retail investors to apply in the public issue of units of Infrastructure Investment trust and Real Estate Investment Trust?

Q3. Who has been declared the winner of Miss India Worldwide 2022?

Q5. Who is called the father of Indian PSUs?

Q7. Which of the following is not a sprinter?

Q8. “Partners in the Blue Pacific” initiative was launched by?

Q9. The elephant siren project in Dhenkanal Forest lies in which state?

The Securities and Exchange Board of India (SEBI) provided an additional payment option of Unified Payments Interface (UPI) to retail investors to apply in the public issue of units of Infrastructure Investment Trust (InvIT) and Real Estate Investment Trust (REIT) for application value up to Rs 5 lakh w.e.f. August 1, 2022.

According to the New-York-based India Festival Committee (IFC), Khushi Patel, a biomedical student from the United Kingdom (UK), has been declared the winner of the Miss India Worldwide 2022, the longest-running Indian pageant outside of India.

The United Nations(UN)’s International Day in Support of Victims of Torture is annually observed across the globe on the 26th of June to create awareness and remind people that human torture is a crime against humanity.

The United Nations(UN)’s International Day Against Drug Abuse and Illicit Trafficking is annually observed across the globe on the 26th of June to strengthen the action and cooperation to achieve the goal of a world free of drug abuse.

The United States and allied countries namely Australia, Japan, New Zealand and the United Kingdom; have launched a new initiative called ‘Partners in the Blue Pacific’. India is not part of it.

The Dhenkanal forest department in Odisha has planned to install automatic sirens near the national highway, in a bid to protect elephants from accidents.

Indian tennis great, Vijay Amritraj has been named the 2021 recipient of the Golden Achievement Award by the International Tennis Hall of Fame and International Tennis Federation. In recognition of his outstanding impact on tennis as a player, promoter, and humanitarian, Amritraj was honoured in London. He is the first recipient from India and he joins an esteemed list of tennis leaders who have received the honour, including Brian Tobin of Australia, Eiichi Kawatei of Japan, and Peachy Kellmeyer of the United States.

Bollywood actor, Nawazuddin Siddiqui has been honoured with an international award for his contribution to cinema. At the prestigious French Riviera Film Festival.