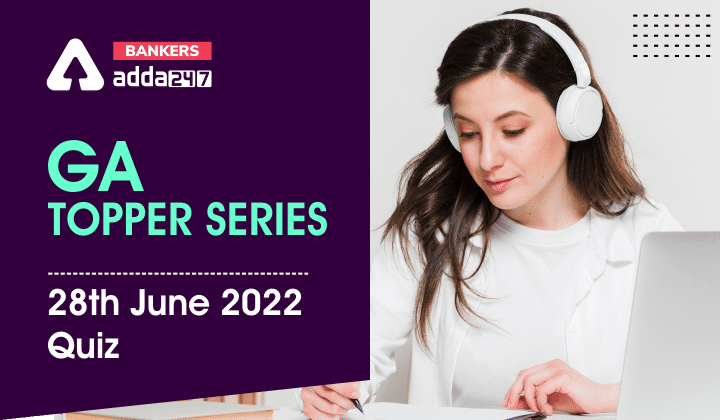 GA Topper Series: 28th June 2022 Quiz: Hello Students, all those students who have cleared their prelims exams in the banking sector must be prepared with every topic in the General Awareness Section for the mains examinations. Bankersadda team has brought you up a new series in which we will come up with 10 questions with the correct answer and the detailed solution to the question.

Q1. What is the meaning of Vitiligo?

(a) A long-term lung infection

Q2. Match the states with festivals

Q3. Consider the following pairs of the new appointments:

Which of the pairs is correct

Q6. Consider the following statements regarding the performance grading index:

Which of the statements is incorrect?

Q7. One Health pilot project is going to be launched in which city?

Q8. Card on file tokenization deadline extended by how many months?

Q10. Who has been appointed as CEO of IDRCL?

World Vitiligo Day(WVD) is annually observed across the globe on the 25th June to create awareness about vitiligo, a long-term skin condition caused due to lack of melanin. The day also aims to include recognition of bullying, social neglect, psychological trauma and disability of the people affected by vitiligo

The people of Goa have celebrated the Sao Joao festival, the feast of St John the Baptist with traditional enthusiasm after a two-year coronavirus-induced gap.

The Baikho festival is celebrated in the state of Assam, which is called a gateway to northeast India. It is celebrated by the Rabha tribes of India.

Sital Sasthi is a sacred Hindu festival is being celebrated in Odisha. This week-long special festival highlights the marriage of Lord Shiva and Goddess Parvati.

Parameswaran Iyer has been appointed as the new Chief Executive Officer of NITI Aayog.

Dr Jitendra Singh, Minister of State for the Government of India, left for Portugal to attend the Lisbon UN Ocean Conference, in 2022. On the topic of Scaling up Ocean Action based on Science and Innovation for the implementation of Goal 14: Stock-taking, Partnerships and Solutions, he will give the conference’s keynote presentation. The Conference will have participants from more than 130 nations.

Indian Air Force announced that three Su-30 MKI planes and two C-17 transport aircraft are taking part in a month-long tactical leadership programme in Egypt. According to the statement, the exercise offers a singular chance to highlight the IAF’s capabilities and reach against the backdrop of the current geopolitical situation. In Egypt (Cairo West Airbase), the Indian Air Force would send three Su-30MKI aircraft, two C-17 aircraft, and 57 IAF personnel to the Egyptian Air Force Weapon School to take part in a tactical leadership programme.

The Indian school Education System is one of the largest in the world with more than 15 lakh schools, nearly 97 lakh teachers and more than 25 crores of students from varied socioeconomic backgrounds.

Department of Animal Husbandry & Dairying (DAHD) will launch One Health Pilot in Karnataka at Bengaluru.

the Reserve Bank of India (RBI) extended the Card on File (CoF) tokenisation deadline by another three months to September 30, 2022, from June 30, 2022, for all Payment System Providers and Payment System Participants. This direction was issued by RBI under Section 10 (2) read with Section 18 of the Payment and Settlement Systems Act, 2007 (Act 51 of 2007).

Ruth Ozeki, American-Canadian author, film-maker and Zen Buddhist priest, has won the Women’s Prize for Fiction 2022 for her novel title “The Book of Form & Emptiness”

Avinash Kulkarni, Chief Executive Officer(CEO) of India Resurgence ARC (Asset Reconstruction Company) Private Limited (IRARC), has been appointed as the CEO of India Debt Resolution Company Limited (IDRCL) for a period of 3 years. He is set to take over as the new CEO of IDRCL from the current CEO Manish Makharia in July 2022