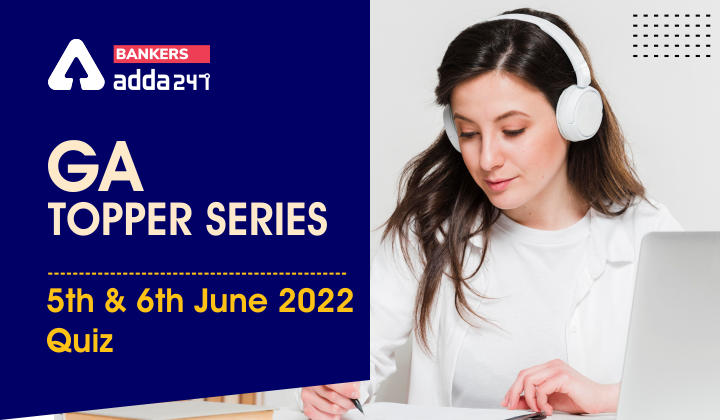 GA Topper Series: 5th & 6th June 2022 Quiz: Hello Students, all those students who have cleared their prelims exams in the banking sector must be prepared with every topic in the General Awareness Section for the mains examinations. Bankersadda team has brought you up a new series in which we will come up with 10 questions with the correct answer and the detailed solution to the question.

Q1. Recently Centre has changed the limit for financial support for Mini technology centre in the NER region. What is the limit?

Q3. Which country has changed its name?

Q5. Sir Ahmed Salman Rushdie was recently in news. Which of the following is its latest book?

Q6. Which 1st ever active NBA basketball player became a billionaire according to a Forbes report?

Q7. What is the theme of World Environment Day?

(a) Time for nature

(c) Only One Earth

Q8. SHRESTHA scheme is for which sector?

Q9. Which of the following company won the bid for Jewar airport?

Q10. Every year on June 4th, the United Nations (UN) observes the International Day of Innocent Children Victims of Aggression. It was first started to focus on victims of?

maximum financial support to state governments for setting up new and modernizing existing Mini Technology Centres has been increased from Rs 10 crore to Rs 13.50 crore as 90% of the project cost. The projects with a total project cost of more than Rs. 15.00 crore, will also be considered

The United Nations (UN) has approved recognize the Republic of Turkey as ‘Türkiye’, pronounced “tur-keyYAY”, following the request from the government of Turkey. “Türkiye” will now be used in all foreign languages and the country’s full official name will be “Republic of Türkiye”.

ToneTag, a brand of Naffa Innovations Pvt Ltd, has been named the winner of two categories in the Reserve Bank of India’s (RBI) first global hackathon, HARBINGER 2021-Innovation for Transformation”

LeBron Raymone James Sr., an American professional basketball player representing the Los Angeles Lakers of the National Basketball Association (NBA), has officially become a billionaire with a net worth of USD 1 billion. LeBron James nicknamed “King James” has become the 1st ever active NBA player to become a billionaire. LeBron James has won 4 NBA championships and has been named NBA Most Valuable Player (MVP) Award 4 times. He was selected to play in the NBA All-Star Game a record 18 consecutive times.

World Environment Day is observed globally on 5th June every year. This day is observed to raise awareness about protecting the environment and to remind people not to take nature for granted. The United Nations Environment Programme (UNEP) is the nodal agency that organizes and supports events across the world.

What is the theme of World Environment Day 2022?

The year 2022 marks the 50th WED. Sweden is the host this year and the theme is ‘Only One Earth,’ focusing on the need to live sustainably in harmony with nature. Only One Earth was the motto for the 1972 Stockholm Conference; 50 years on, the motto holds true – this planet is our only home, whose finite resources humanity must safeguard.

The scheme for Residential Education for Students in Targeted Areas (SHRESHTA) has been formulated with the objective to provide quality education and opportunities for even the poorest.

Tata Projects will build the national capital region’s new airport at Jewar, after outbidding the Shapoorji Pallonji Group and Larsen & Toubro for the contract.

Every year on June 4th, the United Nations (UN) observes the International Day of Innocent Children Victims of Aggression to raise awareness of the children who have been victims of physical, mental, and emotional abuse around the world. On this day, the United Nations reaffirms its commitment to preserving children’s rights.

the very first International Day of Innocent Children Victims of Aggression was observed on August 19, 1982. At the time, the day was focused on victims of the Lebanon War. In the 1982 Lebanon war, Israel’s forces invaded southern Lebanon after repeated attacks and counterattacks between Palestine Liberation Organisation and Israel Defense Forces (IDF). The invasion was carried out after the assassination attempt of the Israeli ambassador.