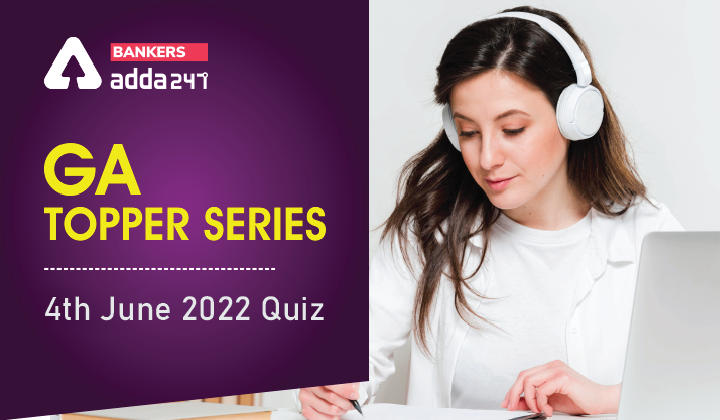 GA Topper Series: 4th June 2022 Quiz: Hello Students, all those students who have cleared their prelims exams in the banking sector must be prepared with every topic in the General Awareness Section for the mains examinations. Bankersadda team has brought you up a new series in which we will come up with 10 questions with the correct answer and the detailed solution to the question.

Q2. Which instrument was played by Bhajan Sopori?

Q4. LeadIT is a joint initiative between India and which country?

Q5. What is the meaning of the word YAAS which is the name of the cyclone-affected India recently?

Q6. Recently Govt of India Targeted to increase Coal Gasification to 100 Million Tonnes by 2030, what is the meaning of coal gasification?

(a) Coal gasification is the process of producing methane gas

(b) Coal gasification is the process of producing petroleum from coal

(c) Coal gasification is the process of producing coke from coal

(d) Coal gasification is the process of producing syngas

Q8. Which country did India defeat to win the bronze medal in the Asia cup of hockey?

Q9. Anjalai Ponnusamy was a freedom fighter who was related to which events of the Indian freedom struggle?

Instagram has launched an ‘alert’ feature to help find missing children. The photo-sharing app has partnered with various organizations globally to set up the feature. The feature will display details about missing children on users’ Instagram feed if they are in a specific area where an active search is taking place.

Santoor maestro and Padma Shri awardee, Bhajan Sopori passed away at the age of 73. The santoor player was born in Sopore in Kashmir Valley in 1948 and belonged to the Sufiana Gharana of Indian classical music. He was the great-grandson of Pandit Shankar Pandit, who had developed the style popularly known as the ‘Sufi Baaj’ (style), based on Sufiana Qalam and Hindustani Classical music.

Blue Dart Express Limited, an Indian logistics company and a part of the Deutsche Post DHL (DPDHL) Group has signed the ‘Climate Neutral Now’ (CNN) pledge framed by the United Nations Framework Convention on Climate Change (UNFCCC) to ambitious CO2 reduction targets and the company’s long term goal is to reduce GHG emissions to net-zero by 2050

UNFCCC- Climate-neutral now: t was launched in 2015 based on a mandate to promote the voluntary use of carbon market mechanisms recognized under the Convention.

LeadIT is a joint initiative between India and Sweden

India and Sweden hosted the Industry transition Dialogue in Stockholm, Sweden, as a part of the India-Sweden joint initiative “Leadership for Industry Transition (LeadIT)”.

LeadIT gathers countries and companies that are committed to action to achieve the Paris Agreement. It was launched by the governments of Sweden and India at the UN Climate Action Summit in September 2019 and is supported by the World Economic Forum(WEF)

The word ‘Yaas’ is said to have originated from the Persian language, and it means ‘Jasmin’ in English.the name of the super cyclone ‘Yaas’, is given by Oman

Freedom fighter Anjalai Ponnusamy, who fought for India’s independence from colonial Britain, died, aged 102. At the age of 21, Anjalai joined the Rani of Jhansi Regiment – the women’s regiment of the Indian National Army – in the hopes of discarding the yoke of British colonialism from the Indian people.