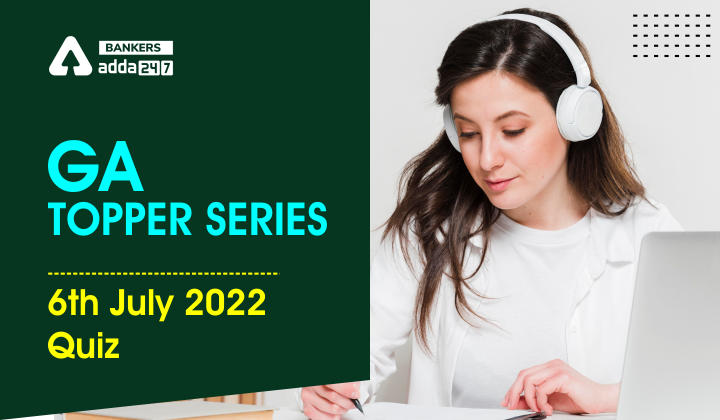 GA Topper Series: 6th July 2022 Quiz: Hello Students, all those students who have cleared their prelims exams in the banking sector must be prepared with every topic in the General Awareness Section for the mains examinations. Bankersadda team has brought you up a new series in which we will come up with 10 questions with the correct answer and the detailed solution to the question.

Q1. Match the defence companies with their countries

Q2. G-20 Foreign Minister meeting is going to be held in

Q3. Shahid Kapoor has become the brand ambassador of which digital platform?

Q5. BiSAG- N is used by which ministry to join the PM Gati Shakti Portal?

(a) Ministry of Finance

(b) Ministry of Electronics

Q6. Who has been the youngest Speaker of the state assembly?

Q7. The changes in FCRA have led to an increase in the limit to receiving money from foreign. What is the earlier cap of FCRA limit?

Q8. What is the full form of the RIMPAC exercise?

(a) Rim of Pacific ocean

(b) Real Maritime of Pacific

(d) Rim of the Pacific

Q9. In the 3rd edition of States Startup Ranking 2021, which Northeastern state topped in its category?

Q10. Which state got 2nd rank in State Ranking Index for NFSA in General Category?

Defence Minister Rajnath Singh invites French aircraft engine maker SAFRAN for a codeveloped & productive project in the line with ‘Make in India’, Make for the World’

Tanuja Nesari, Director of All India Institute of Ayurveda (AIIA) was awarded the Ayurveda Ratna Award by the UK Parliament. The UK’s All-Party Parliamentary Group on Indian Traditional Sciences (ITSappg) conferred the award recognising her contribution to promoting the growth of Ayurveda in India and abroad.

The Ministry of Steel said that it has joined the PM Gati Shakti Portal and uploaded the geo-coordinates of important projects in an effort to detect and address connection gaps in the infrastructure with the help of the Bhaskaracharya National Institute for Space Applications and Geo-informatics (BiSAG-N) app.

Chandrani Murmu (born 16 June 1993) is an Indian politician. She was elected to the Lok Sabha, the lower house of the Parliament of India from Keonjhar, Odisha in the 2019 Indian general election

Indians are now permitted to receive up to Rs. 10 lakh annually from relatives who live overseas without telling the authorities thanks to changes made by the Union Home Ministry to certain rules relating to the Foreign Contribution (Regulation) Act (FCRA). The previous cap was Rs. 1 lakh.

The home ministry also stated in a notification that instead of 30 days, if the sum surpasses, the people would now have 90 days to notify the government. The new regulations, known as the Foreign Contribution (Regulation) Amendment Rules, 2022, were published in the gazette by the home ministry.

Indian Navy’s indigenous Frigate INS Satpura and P8I LRMRASW aircraft are at Pearl Harbour in Hawaii taking part in one of the largest multilateral Naval Exercises, the Rim of the Pacific exercise, also known as RIMPAC.

Gujarat and Karnataka emerged the “best performers” in the third edition of States’ Start-up ranking, 2021, while Meghalaya bagged the top honour among Northeastern (NE) states. In the second edition of the survey, which was conducted in 2020, Gujarat was the best performer.

Odisha has been adjudged the top-ranked State followed by Uttar Pradesh at the 2nd spot and Andhra Pradesh at third amongst the General Category States in ‘State Ranking Index for NFSA’. Among the Special Category States/UTs, Tripura stood first followed by Himachal Pradesh and Sikkim respectively. Further, among the 3 UTs where Direct Benefit Transfer (DBT)- Cash is operational, Dadra and Nagar Haveli & Daman and Diu are the top-ranked UT.