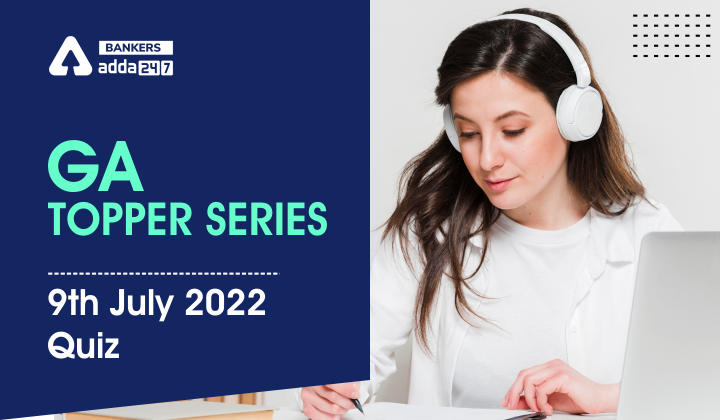 GA Topper Series: 9th May 2022: Hello Students, all those students who have cleared their prelims exams in the banking sector must be prepared with every topic in the General Awareness Section for the mains examinations. Bankersadda team has brought you up a new series in which we will come up with 10 questions with the correct answer and the detailed solution to the question.

Q1. What is the name of the former Japan’s Prime Minister who was shot at election campaign?

Q3. Who has been appointed as president of Association of Indian Universities?

Q4. Who is founder of Bhoodan Movement?

Q5. Who is the partner of RBI for undertaking consumer confidence and inflation anticipation surveys?

Q7. In which stadium “Haryali Mahotsav” will be organized in Delhi?

Q8. Which mobile phone has launched the feature lockdown mode to protect from cyber attacks?

Q9. Which institution released the ‘Global Findex database 2021’ with the theme Financial Inclusion, Digital Paymentsand resilience in the age of COVID-19??

Q10. As per the RBI’s liberalized norms, what is the new limit of External Commercial Borrowing (ECB) under automatic route?

Shinzo Abe, Former Japan’s Prime Minister, who was shot at during an election campaign in western Japan’s Nara city, has passed away.

The Jadavpur University Vice-Chancellor, Suranjan Das appointed as the president of the Association of Indian Universities (AIU).

R Dinesh, Executive Vice-Chairman of TVS Supply Chain Solutions, has been chosen as the Confederation of Indian Industry’s (CII) President Designate for the years 2022–2023. He previously served as the Chairman of the National Committees on Logistics, the CII Family Business Network India Chapter Council, the CII Tamil Nadu State Council, and the CII Institute of Logistics Advisory Council. From 2018 to 2019, he served as the Chairman of the CII Southern Region.

Freedom fighter P. Gopinathan Nair has passed away at the age of 100. He was known for following Gandhian ideology in his life

Freedom fighter P. Gopinathan Nair has passed away at the age of 100. He was known for following Gandhian ideology in his life and was honoured with the Padma award. He had taken part in the Quit India Movement of 1942 and had worked alongside Vinoba Bhave to promote Bhoodan and Gramdan movements. The Government of India awarded him the fourth highest civilian honour of Padma Shri in 2016 for his contributions to society.

In order to undertake field research for the July 2022 cycle of the consumer confidence and inflation anticipation surveys, the Reserve Bank of India (RBI) announced that it had chosen to partner with the Mumbai-based Hansa Research Group.

The former CEO of Niti Aayog, Amitabh Kant, will take on the role of G-20 Sherpa. Piyush Goyal, a Union Minister, would be replaced by Kant because he is expected to resign owing to workload.

All the stadiums are in Delhi

Ministry of Environment, Forest & Climate Change will be organizing “Hariyali Mahotsav” on 8th July, 2022 at Talkatora Stadium, New Delhi in the spirit of “Azadi Ka Amrit Mahotsav”. The mahotsav is being organized by Ministry of Environment, Forest and Climate Change in collaboration with the State Governments, Police Institutions and Schools of Delhi for undertaking plantation drives on the occasion

The ‘Lockdown Mode’ feature for iPhones, iPads and Mac devices, will reduce the attack surface for hackers on these devices by limiting the functionalities of the smartphone that could be potentially accessed by spy softwares.

World Bank released the Global Findex Database 2021: Financial Inclusion, Digital Payments, and Resilience in the Age of COVID-19.
It surveyed how people in 123 economies use financial services throughout 2021. As per the report, large share of the global population without formal banking lives in India and China because of their size. The report also found that women are more likely to be unbanked than men.

Reserve Bank of India liberalized norms to boost inflows of foreign exchange. The measures include easing norms for FPI investment in debt market, and increasing the External Commercial Borrowing (ECB) limit under the automatic route from USD750 million or its equivalent per financial year to USD 1.5 billion.
Exemption from Cash Reserve Ratio (CRR) and Statutory Liquidity Ratio (SLR) on Incremental FCNR (B) and NRE Term Deposits was also announced.