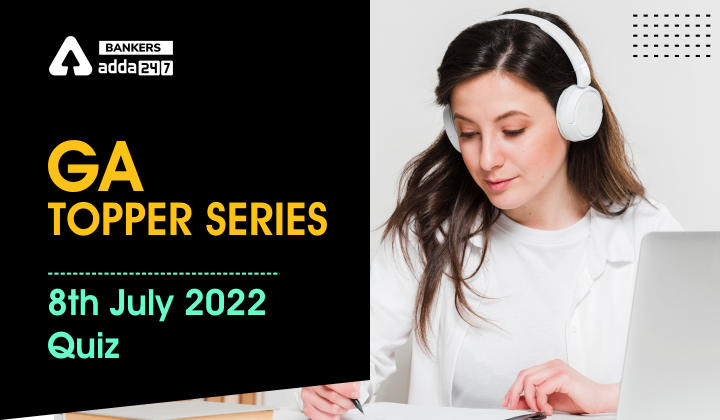 GA Topper Series: 8th July 2022: Hello Students, all those students who have cleared their prelims exams in the banking sector must be prepared with every topic in the General Awareness Section for the mains examinations. Bankersadda team has brought you up a new series in which we will come up with 10 questions with the correct answer and the detailed solution to the question.

Q1. In honour of India’s first President, Dr. Rajendra Prasad Memorial Award in Public Administration has been established. In which early movements of freedom struggle, he helped Mahatama Gandhi?

Q3. How many Member of Parliament are nominated in Rajya Sabha?

Q4. Match the following personalities with their field

Q5. Jyotiraditya Scindia has been given additional charge of Ministry of steel. He is Minister of which other ministry?

Q8. India has been elected as a member of the Intergovernmental Committee of which international institution for the 2022-2026 cycle?

Q9. Mission Vatsalya of ministry women and child development is for what purpose?

(b) Mother and child debvelopment

In honour of India’s first President, Dr. Rajendra Prasad Memorial Award in Public Administration has been established, according to Science and Technology Minister Dr. Jitendra Singh in New Delhi. Dr. Singh presided over a meeting of the Executive Council of the Indian Institute of Public Administration (IIPA).

The ruling Bharatiya Janata Party (BJP) has nominated four noted personalities from the southern states to the Rajya Sabha. The move is being seen as the BJP’s attempt to make inroads into South India — the party’s final frontier that it still has to conquer. Sports icon PT Usha, music maestro Ilaiyaraaja, spiritual leader Veerendra Heggade, and screenwriter KV Vijayendra Prasad were the four picks of the BJP for the Rajya Sabha.

Jyotiraditya Scindia is the minister of civil aviation.

India’s first Autonomous Navigation facility, TiHAN inaugurated by Union Minister of State for Science & Technology, Jitendra Singh at the IIT Hyderabad campus. Developed at a budget of Rs. 130 crores by the Union Ministry of Science & Technology, TiHAN (Technology Innovation Hub on Autonomous Navigation) is a multidisciplinary initiative that will make India a global player in the futuristic and next generation ‘smart mobility’ technology.

India has been elected as a member of the Intergovernmental Committee of UNESCO’s 2003 Convention for the Safeguarding of the Intangible Cultural Heritage for the 2022-2026 cycle. The elections for the Intergovernmental Committee took place during the 9th General Assembly of the 2003 Convention held at UNESCO headquarters, Paris.

India presidency is going to be over in UNSC , India is not a part of OPEC , G7

The Ministry of Women and Child Development is implementing a Centrally Sponsored Scheme “Mission Vatsalya” erstwhile Child Protection Services (CPS) Scheme, since 2009-10 for the welfare and rehabilitation of children. The objective of Mission Vatsalya is to secure a healthy and happy childhood for each and every child in India, ensure opportunities to enable them to discover their full potential and assist them in flourishing in all respects, in a sustained manner, foster a sensitive, supportive and synchronized ecosystem for development of children, assist States/UTs in delivering the mandate of the Juvenile Justice Act 2015 and achieve the SDG goals. Mission Vatsalya promotes family-based non-institutional care of children in difficult circumstances based on the principle of institutionalization of children as a measure of last resort.

At present, banks are required to include all Foreign Currency Non-Resident (Bank) [FCNR(B)] and Non-Resident (External) Rupee (NRE) deposit liabilities for computation of Net Demand and Time Liabilities (NDTL) for maintenance of CRR and SLR. It has been decided that with effect from the reporting fortnight beginning July 30, 2022 incremental FCNR(B) and NRE deposits with reference base date of July 1, 2022 will be exempt from the maintenance of CRR and SLR. This relaxation will be available for deposits mobilised up to November 4, 2022. Transfers from Non-Resident (Ordinary) (NRO) accounts to NRE accounts shall not qualify for the relaxation