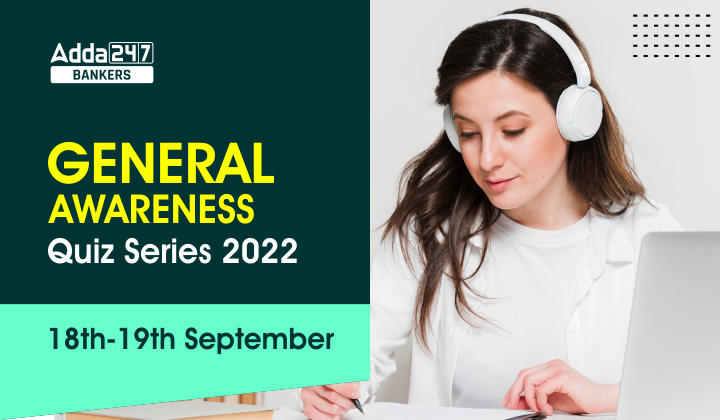 General Awareness Quiz Series 2022: 18th-19th September: Hello Students, General Awareness is an essential part of all government exams. It’s better to prepare this section daily and revise the same using the factsheet provided. Bankersadda team has brought you up a new series in which we will come up with 10 questions and answers, other options of the question have related news to them. So don’t miss reading the solutions.

Q2. International Equal Pay Day, celebrated on 18 September, which day is coincides with this day?

Q3. Who has been appointed as the President of Angola?

Q4. What is the name of the climate activist who has been recently appointed as Goodwill Ambassador of the UN Children’s Fund and which Country she belongs?

Q5. What is the name of the Tata group-owned global airline?

Q6. Who has released a new digital publication ‘BLO e-Patrika’?

(a) Election Commission of India

Q7. Which Indian bank is the only bank which got listed in the top 00 best workplaces in Asia 2022?

Q8. With which country Kyrgyzstan has reported intense battles with?

Q9. Where the 6th edition of JIMEX held?

Q10. Global Clean Energy Action Forum will be lead by ?

International Equal Pay Day, celebrated on 18 September, represents the longstanding efforts towards the achievement of equal pay for work of equal value.

Prasanna Kumar Motupalli is selected as the Chairman and Managing Director of NLC India Limited by the Public Enterprises Selection Board (PESB).

The National Electoral Commission announced Joao Lourenco as the President with 51% of the votes. President Joao Lourenco is a member of the Popular Movement for the Liberation of Angola (MPLA)

UNICEF appointed Vanessa Nakate, a 25­-year­-old climate activist from Uganda as the Goodwill Ambassador of the UN Children’s Fund

Air India, a Tata group-owned airline, unveiled a comprehensive Vihaan.AI to establish itself as a world-class global airline of Indian origin. Vihaan.AI focuses on growing both its network and fleet.

The Election Commission of India has released a new digital publication ‘BLO e-Patrika’ at an interactive session held with BLOs spread across the states in India.

Delhi Police has become the first police force in India to make a collection of forensic evidence mandatory in crimes punishable by more than six years.

Federal Bank was ranked 63rd on the Best Workplaces in Asia 2022 and becomes the only bank in India to be listed by Great Place to Work, the global authority on workplace culture.

Kyrgyzstan reported “intense battles” with Central Asian neighbour Tajikistan and said 24 people had been killed in the latest outbreak of violence to hit the former Soviet Union.

The sixth edition of the Japan India Maritime Exercise 2022, JIMEX 22 hosted by the Indian Navy concluded in the Bay of Bengal

Dr Jitendra Singh will lead the Joint Indian Ministerial official delegation of Ministry of Power, New & Renewable Energy and Ministry of Science & Technology on a 5-day visit to USA, to participate in Global Clean Energy Action Forum and also to interact with eminent academicians as well as Indian diaspora.