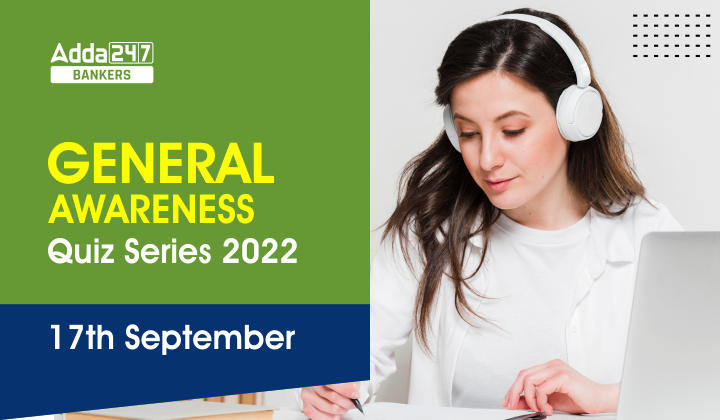 General Awareness Quiz Series 2022: 17th September: Hello Students, General Awareness is an essential part of all government exams. It’s better to prepare this section daily and revise the same using the factsheet provided. Bankersadda team has brought you up a new series in which we will come up with 10 questions and answers, other options of the question have related news to them. So don’t miss reading the solutions.

Q1. Consider the following statements about the reintroduction of tigers in India:

Which of the statements is / are incorrect?

Q2. Who is the advisor to the Indian government on the cheetah relocation project?

Q3. Blockchain analysis platform Chainalysis published its global crypto adoption index for 2022, India got ____ and its topped by ____?

Q5. Which of the days is not correctly matched?

Q6. In which state India is going to have its first Forest University?

Q7. Which of the following state is not having Food Security Atlas?

Q9. Which magazine has received the National Rajbhasha Kirti Award?

Q10. What is the name of the Chairman of the committee which is address regulatory issues to scale up investments by venture capital (VC) and private equity (PE)?

Eight African cheetahs are all set to move from Namibia into their new habitat at the Kuno National Park in Madhya Pradesh, September 17, on Prime Minister Narendra Modi’s birthday. The PM is expected to release the five female and three male cheetahs into the Park’s quarantine enclosures on Friday as part of his efforts to revitalise and diversify the country’s wildlife and habitat, his office has said.

Dr Laurie Marker, who has been an advisor to the Indian government on the cheetah relocation project for over 12 years told that this is the first time that a trans-continental project like this is taking off.

Blockchain analysis platform Chainalysis published its global crypto adoption index for 2022 of nations with the highest cryptocurrency adoption rate with India ranking fourth in the list, two spots down from last year ,the global index is led by Vietnam for the second consecutive year

The Padmaja Naidu Himalayan Zoological Park (PNHZP) in West Bengal’s Darjeeling has been adjudged the best zoo in the country.

World Patient Safety Day is observed every year on 17 September to create awareness about different safety measures that should be taken to ensure patient safety.

In India, Engineer’s Day is celebrated on September 15 every year. The day is celebrated to recognise the contribution of engineers in the development of the nation. This day commemorates the birth anniversary of Sir Moksha Gundam Visvesvaraya,

India is going to have its first Forest University. The Forestry Universities (UoF) Act 2022 was approved by the Telangana Assembly. UoF will be the first of its kind in India

Jharkhand has become the third state after Bihar and Odisha in eastern India to have Food Security Atlas for its rural areas.

The Competition Commission of India (CCI) approved the acquisition of 100 percent equity of Indiaideas.com (Billdesk) by PayU Payments.

CSIR’s popular science magazine “Vigyan Pragati” has created a new history. This magazine has received the National Rajbhasha Kirti Award (First position) and this award was given at the Second All India Rajbhasha Sammelan

Sjoerd Marijne, authored a new book titled “Will Power: The Inside Story of the Incredible Turnaround in Indian Women’s Hockey

BVR Subrahmanyam (lAS) has been appointed as the new Chairman & Managing Director of the India Trade Promotion Organization (ITPO).

Sanjay Kumar Rakesh, a former IAS officer, has been named the managing director of the CSC e-Governance India SPV, which is run by the central government.