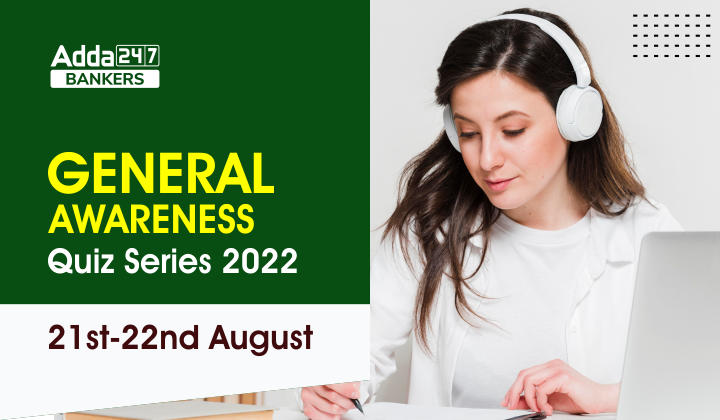 General Awareness Quiz Series 2022: 21st-22nd August: Hello Students, General Awareness is an essential part of all government exams. It’s better to prepare this section daily and revise the same using the factsheet provided. Bankersadda team has brought you up a new series in which we will come up with 10 questions and answers, other options of the question have related news to them. So don’t miss reading the solutions.

Q1. Which bank has inaugurated an all –women branch in Kozhikode, Kerela?

Q2. What is the name of the memoir written by Benjamin Netanyahu?

(a) Wrist Assured: An Autobiography

Q3. Lakshya Sen, Kidambi Srikanth, Satwiksairaj Rankireddy, and Chirag Shetty are named as brand ambassadors for which company and these players belong to which sport ?

Q4. Who has launched the campaign : ‘#PlayForOurHeroes’?

Q5. How many Major ports India have?

Q6. Which state has announced the launch of seed distribution to farmers based on blockchain technology?

Q7. Where is the headquarters of International Organization of Securities Commission’s (IOSCO)?

Q8. Who has started the Goodfellows company which will provide provides companionship services for senior citizens?

Q9. The tenure of Dr. V G Somani as the Drugs Controller General of India (DCGI) has been extended by three months. DCGI is the head of the department of the Central Drugs Standard Control Organization(CDSCO). CDSCO comes under which ministry?

(a) Ministry of Chemical and fertilizers

(b) Ministry of Home Affairs

The RBI said the licence of Deccan Urban Co-operative Bank, Karnataka, has been cancelled as the lender does not have adequate capital and earning prospects. As per the data submitted by the bank.

Former prime minister Benjamin Netanyahu has a memoir coming out this fall. “Bibi: My Story” will be published November 22, in Israel. Born a year after the founding of the Jewish state.

Former Indian footballer and one of the very few from the city to have represented all the three famous clubs of Kolkata, Victor Amalraj, formally launched his autobiography “Midfield Maestro”

A draft to amend the Indian Ports Act, of 1908, has been made public by the Ministry of Ports, Shipping, and Waterways. It aims to implement significant reforms in the sector by including minor ports in the national framework, developing a new dispute-resolution procedure, and strengthening the maritime state development council (MSDC). There are 12 major ports in India.

IOSCO was established in 1983. Its membership regulates more than 95% of the world’s securities markets in more than 130 jurisdictions: securities regulators in emerging markets account for 75% of its ordinary membership.

The IOSCO Objectives and Principles of Securities Regulation have been endorsed by both the G20 and the FSB as the relevant standards in this area.

Capital markets regulator Securities and Exchange Board of India (SEBI) has allowed new guidelines for Alternative Investment Funds (AIFs) and Venture Capital Funds (VCFs) for investing abroad, under which overseas investment firms won’t need to have an Indian connection.

AIFs or VCFs will be allowed to invest in an overseas investee company, which is incorporated in a country whose securities market regulator is a signatory to the International Organization of Securities Commission’s (IOSCO) Multilateral Memorandum of Understanding or a signatory to the bilateral MoU with SEBI.

Goodfellows is a company that provides companionship services for senior citizens, and it was established by Ratan Tata, a pioneer in the sector. The goal of the Goodfellows company is to establish enduring bonds between seniors and recent graduates.

According to an order issued by the Union Health Ministry, The tenure of Dr. V G Somani as the Drugs Controller General of India (DCGI) has been extended by three months.

A team of stem cell researchers in Israel has developed the world’s first synthetic embryo outside the womb using stem cells cultured in a petri dish.