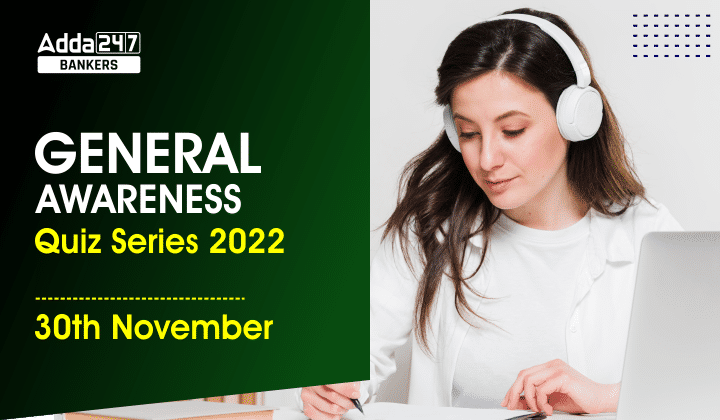 General Awareness Quiz Series 2022: 30th November: Hello Students, General Awareness is an essential part of all government exams. It’s better to prepare this section daily and revise the same using the factsheet provided. Bankersadda team has brought you up a new series in which we will come up with 10 questions and answers, other options of the question have related news to them. So don’t miss reading the solutions.

Q1. Which of the city has planned India’s first Retail Municipal Green Bond for Solar Plant?

Q2. Who is the chairman of the High level committee setup by the SEBI to simplify and strengthen the current Corporate rules?

Q3. Reserve Bank of India (RBI) announced a trial for retail digital rupee (e ₹-R) beginning 1 December, with four banks. Which of the following is not among the four banks?

Q4. Which of the following days is not celebrated in November month?

(b) Day of Remembrance for all Victims of Chemical Warfare

Q5. Which of the airline is going to merged in Air India?

Q6. Who has been appointed as the BSE ltd CEO and Managing Director?

Q7. Which company has designed and will operate first private launchpad and mission control center?

Q8. Who has been conferred with Award of Excellence at UNESCO Asia-Pacific Awards for Cultural Heritage Conservation-2022?

Q9. Har Ghar Gangajal Project has been launched by which state?

Q10. In which country Volcano Mauna Loa is located?

Capital markets regulator Sebi has set up a high-level panel to review the takeover norms in a move to simplify and strengthen the current Corporate rules by adopting appropriate global practices.The 20-member committee will be chaired by former Chief Justice of Punjab and Haryana High Court, Shiavax Jal Vazifdar

Rashtraku Kuvempu Prathishtana Kuppali has chosen Tamil poet V Annamalai aka Imayam for the Kuvempu National Prize for the year 2022, which will be presented at Kuppali’s 118th birth anniversary celebration on December 29 in Thirthahalli taluk.

The Reserve Bank of India (RBI) announced a trial for retail digital rupee (e ₹-R) beginning 1 December, with four banks in as many cities participating in the pilot programme, a month after testing the wholesale central bank digital currency (CBDC). That are State Bank of India, ICICI Bank, Yes Bank and IDFC First Bank.

Day of Remembrance for all Victims of Chemical Warfare is commemorated on November 30 every year.

Commemorating the day one of the most significant space missions to Mars was launched, November 28 is marked as Red Planet Day. After 3 previous attempts, Spacecraft Mariner 4 became the first successful flyby of Mars. The spacecraft was launched on November 28, 1964, and reached Mars on July 14, 1965

November 29 is marked as the International Day of Solidarity with Palestinian People every year.

Singapore Airlines (SIA) and Tata Sons announced that they have agreed to merge Air India and Vistara, with SIA getting a 25.1 per cent stake in the merged entity at an investment of Rs 2,058.5 crore ($250 million) in Air India as part of the transaction.

BSE Ltd announced that the market regulator Securities and Exchange Board of India (SEBI) has approved Sundararaman Ramamurthy as the managing director (MD) and chief executive officer (CEO) of the exchange.

Bombay Stock Exchange was started by Premchand Roychand in 1875.

India’s first private launchpad and mission control center has been established within the ISRO campus at Satish Dhawan Space Centre (SDSC) in Sriharikota. The launchpad is designed and operated by Chennai-based space-tech startup AgniKul Cosmos.

Vice President Jagdeep Dhankar and Union Textile Minister Piyush Goyal honored Mohammad Yusuf Khatri with a gold medal and Tamra Patra at Vigyan Bhawan. Mohammad Yusuf Khatri of the Dhar district of Madhya Pradesh has been awarded the Shilp Guru Award for the year 3017 for the conservation of the legacy of Bagh Print handicrafts.

The world’s largest active volcano erupted in Hawaii for the first time in four decades. Mauna Loa erupted at 11.30 pm according to the U.S. Geological Survey