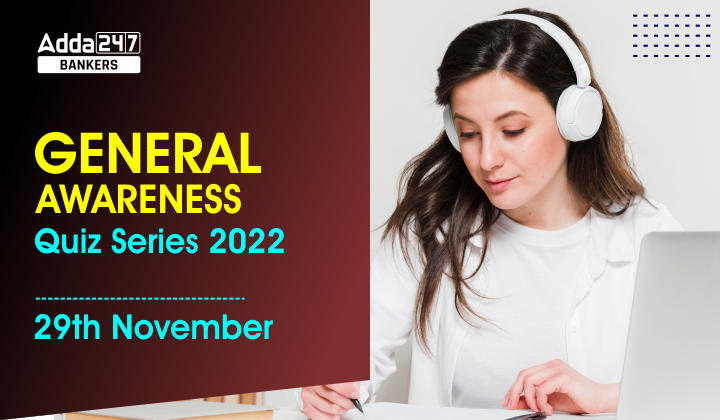 General Awareness Quiz Series 2022: 29th November: Hello Students, General Awareness is an essential part of all government exams. It’s better to prepare this section daily and revise the same using the factsheet provided. Bankersadda team has brought you up a new series in which we will come up with 10 questions and answers, other options of the question have related news to them. So don’t miss reading the solutions.

Q1. When International Day of Solidarity with the Palestinian People is observed on?

Q2. Which university/ institute has started Financial Support Scheme (FSS) for those students who come from an economically weaker background?

Q3. Which of the pairs of scheme and state is correct?

Q5. What is the name of the movie which won the Prasad DI award?

Q6. Which ministry won the GOLD AWARD in the category “Excellence in Government Process Re-engineering for Digital Transformation” of the National Awards for e-Governance?

(a) Ministry of Panchayati Raj

Q8. Who is the first woman to be elected as the President of Indian Olympics Association?

Q9.What is the time period given by SEBI in its recent circular to Mutual Funds to pay dividend to unit-holders after declaration of record date?

Q10. Arittapatti and Meenakshipuram has been declared as biodiversity heritage site by which state government?

International Day of Solidarity with the Palestinian People 2022 is observed on the 29th of November 2022.

The Delhi University has launched a Financial Support Scheme (FSS) for those students who come from an economically weaker background and have enrolled in full-time undergraduate and postgraduate courses at the university.

Sany Bharat signed a Memorandum of Understanding (MoU) with the Union Bank of India to make equipment financing an easy, efficient, and simple process.

Honda Cars India Limited (HCIL) has signed a Memorandum of Understanding (MoU) with IDBI Bank to offer a host of finance schemes for its customers.

TAC Security, a risk and vulnerability management firm, declared that it is the official cyber security partner of the BSE stock market.

Team Purple- movie named Dear Dairy was chosen as the winner of the 75 Creative Minds of Tomorrow talent campus, which is part of the International Film Festival of India.

Ministry of Panchayati Raj’s e-Panchayat Mission Mode Project (eGramSwaraj and AuditOnline) has won the GOLD AWARD in the category “Excellence in Government Process Re-engineering for Digital Transformation” of the National Awards for e-Governance.

Mutual funds (MFs) have to pay dividend to unit-holders in seven working days after declaration of record date. In a circular issued, SEBI said the record date will be two working days from the issue of public notice on dividend payment.