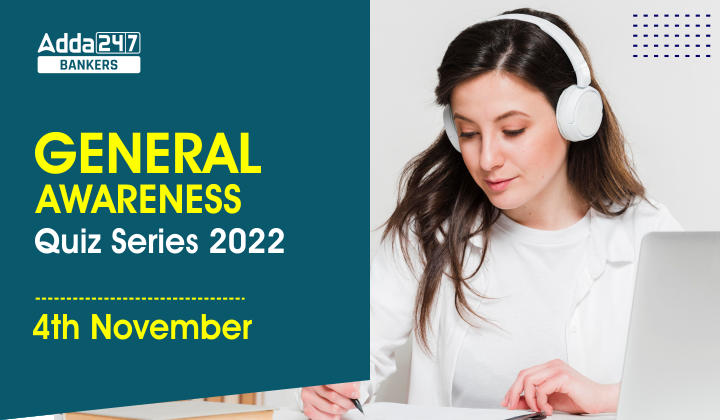 General Awareness Quiz Series 2022: 4th November: Hello Students, General Awareness is an essential part of all government exams. It’s better to prepare this section daily and revise the same using the factsheet provided. Bankersadda team has brought you up a new series in which we will come up with 10 questions and answers, other options of the question have related news to them. So don’t miss reading the solutions.

Q1. Elan Bhatt a noted Gandhian died recently, She was the founder of which NGO organisation?

Q3. Which armed forces Combat uniform has been given the IPR registration?

Q4. Which word has been chosen by the Collins Dictionary  word of the year?

Q6. Who has written the book “De la Nucléarisation de l’Asie“(Nuclearization of Asia)?

Q7. “Reinvigorating India’s Economic Engagements with Southern Africa” report has been released by

Q8. Empowerment of Citizens through Legal Awareness and Outreach and “Haq hamara bhi hai@75,” has been launched by ?

Q9. Securities and Exchange Board of India (SEBI) issued norms regarding the standardization of rating scales used by Credit Rating Agencies (CRAs), which will be applicable from _______

Q10. When International Day to End Impunity for Crimes against Journalists is annually observed?

French Navy Ship Aconit, one of the five La Fayette Class frigates of the French Navy was on a goodwill visit to Mumbai

The process for registration of the new Camouflage Pattern and Design of Improved Combat Uniform to establish ownership of Indian Army has been completed by the Controller General of Patents, Designs and Trademark, Kolkata

Permacrisis has been chosen as the Collins Dictionary’s word of the year. The word means an extended period of instability and insecurity. “Permacrisis sums up just how truly awful 2022 has been for so many people,” Alex Beecroft, head of Collins Learning told AFP.

French Author Rene Naba has authored a new bilingual book in both French and English titled “De la Nucléarisation de l’Asie“(Nuclearization of Asia). The book discusses the nuclear emergency and threat posed by the nexus of Pakistan and China. The book published by Golias was released at the Geneva Press Club which was attended by the in­person participation of 35 people and 23 of them participated in virtual mode.

Akshay Shah and Stephen Alter have compiled and edited a new book “The Corbett Papers: Biographical, Legal, & Contextual Material on the Life & Career of Jim Corbett of Kumaon” about Jim Corbett.

In order to foster a spirit of inclusivity, Justice Chandrachud, Executive Chairman of the National Legal Services Authority (NALSA), has launched two campaigns:

“Empowerment of Citizens through Legal Awareness and Outreach” , “Haq hamara bhi hai@75,” a special campaign for legal aid in prisons and childcare institutions

Securities and Exchange Board of India (SEBI) issued norms regarding the standardization of rating scales used by Credit Rating Agencies (CRAs) which will be applicable from January 1, 2023.

United Nations(UN)’s International Day to End Impunity for Crimes against Journalists is annually observed across the globe on 2nd November to condemn all attacks against journalists and media workers.