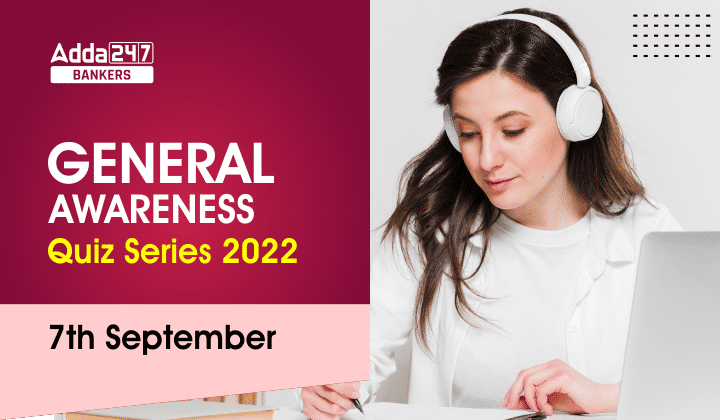 General Awareness Quiz Series 2022: 7th September: Hello Students, General Awareness is an essential part of all government exams. It’s better to prepare this section daily and revise the same using the factsheet provided. Bankersadda team has brought you up a new series in which we will come up with 10 questions and answers, other options of the question have related news to them. So don’t miss reading the solutions.

Q1. Match the states with their schemes

Q2. All female central government employees will be entitled to 60 days special maternity leave, It is for what purpose?

(b) For child genetic illness

(c) for taking care of children aged above 2 years

(d) death of a child soon after birth

Q3. What is the old name of the Rajpath which was renamed post-independence?

Q5.Which of the following state has become to have the first modified bio-village and what is the name of the village?

Q6. Who has topped among all Ministries/Departments for resolving Public Grievances in the ranking?

(a) Minsitry of Defence

(a) Ministry of Finance

Q8. Which of the following pairs of prime minister and country is incorrect?

Q9. Who has written The book ‘Divorce and Democracy: A History of Personal Law in Post-Independence India’?

Q10. Which of the following is not won by Red Bull’s driver Max Verstappen?

The Uttarakhand education department launched an e-governance portal “Samarth”. This portal provides all administrative and educational updates including information about entrance exams, salary structures, and appointments from five state universities and 140 public schools.

All female central government employees will be entitled to 60 days special maternity leave in case of death of a child soon after birth, an order issued by the Department of Personnel and Training (DoPT)

the first such instance was the renaming of Kingsway Road to Raj Path and Queensway to Janpath, post-Independence. Kingsway Road is where the Republic Day parade is currently held

Rajpath and Central Vista lawns will now be known as Kartavya Path, according to the Indian government’s announcement.

Prime Minister Narendra Modi has announced a new initiative, the development and upgradation of 14 thousand 500 schools across the country under the Pradhan Mantri Schools For Rising India (PM-SHRI) Yojana

Tripura becomes the first state in India to have the first modified bio-village. The Daspara village of Tripura is converted into a nature-based lifestyle and livelihood.

Alappuzha has become the fifth fully digital banking district in the state. A declaration was made by the Reserve bank of India Kerala and Lakshadweep Regional Director Thomas Mathew regarding this.

North-east state, Nagaland got its second railway station after a gap of more than 119 years with the commissioning of a new facility at Shokhuvi

Unique Identification Authority of India (UIDAI) has topped among all Ministries/Departments for resolving Public Grievances in the ranking. The report was published by the Department of Administrative Reforms and Public Grievances (DARPG)

UK’s new Prime Minister (PM): Liz Truss was elected as the leader of the ruling Conservative Party and the country’s next prime minister. Liz Truss is now the third woman to be elected prime minister of the United Kingdom. By more than 20,000 votes, Liz Truss defeated Rishi Sunak, who is of Indian descent. The country is currently experiencing a cost of living crisis, industrial unrest, and a recession.

‘Divorce and Democracy: A History of Personal Law in Post- written by Saumya Saxena.

The autobiography “The Hero of Tiger Hill: Autobiography of a Param Vir”, is about the inspiring story of Subedar Major (Honorary Captain) Yogendra Singh Yadav (Retd).

Mallika Sarabhai bares it all in her upcoming self-help memoir, “Free Fall: My Experiments with Living”.

A new book named ‘India’s Economy From Nehru To Modi:: A Brief History’ written by by Pulapre Balakrishnan