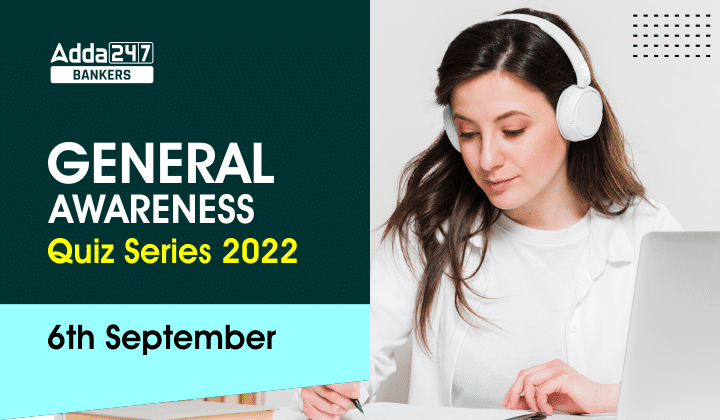 General Awareness Quiz Series 2022: 6th September: Hello Students, General Awareness is an essential part of all government exams. It’s better to prepare this section daily and revise the same using the factsheet provided. Bankersadda team has brought you up a new series in which we will come up with 10 questions and answers, other options of the question have related news to them. So don’t miss reading the solutions.

Q1. These players were in news, Match the players with their games?

Q2. In recent reports it is said that trade deficit doubled to USD 28.68 billion of India. What is the reason for this increase?

(a) Increased exports of wheat

(b) Increased imports for medicine API from China

Q3. What is the name of the Netflix documentary for which Obama got best narrator Emmy Award?

(b) Our Great National Parks

(d) Politics is a mystery

Q5. Which institute is going to offer a remediation program for children with dyslexia studying in one of the regional language?

Q6. How many pairs of Obituary and their field of expertise is correct?

Q8.Who has been nominated by President of India as the next chairperson of the National Legal Services Authority (NALSA)?

Q9. Who has launched the pilot project for end-to-end digitalization of lending via Kisan Credit Cards (KCC)?

Q10. What is the name of the nutrition app developed by the ICRISAT which will target vulnerable groups?

Grandmaster Aravindh Chithambaram emerged champion in the 22nd Dubai Open chess tournament, with 7.5 points as seven Indians finished in the top 10 with R Praggnanandhaa sharing the second spot with five others.

India’s exports contracted by 1.15 percent to USD 33 billion in August, for the first time in over 20 months, while the trade deficit more than doubled to USD 28.68 billion due to increased crude oil imports.

Obama won the best narrator Emmy for his work on the Netflix documentary series, Our Great National Parks.

Bharti Airtel has launched a pilot project in partnership with TP Northern Odisha Distribution to offer bill payment solutions to more than two million registered customers of the utility.

The National Programme on Technology Enhanced Learning (NPTEL), IIT Madras, is collaborating with Madras Dyslexia Association (MDA) to offer a remediation program for children with dyslexia studying in Tamil medium

Former chairman of Tata Sons, Cyrus Mistry has Passed away at the age of 54 in a road accident near Mumbai.

The Indian Army contingent of the Gorkha Regiment troops began the multilateral strategic and command Exercise Vostok – 2022 at the training grounds of the Eastern Military District of Russia which will take place Sep 01 to 07 2022.

The Reserve Bank of India (RBI) has launched the pilot project for end-to-end digitalization of lending via Kisan Credit Cards (KCC).

The Securities and Exchange Board of India (SEBI) has restructured its high-level panel on cyber security that suggests measures to safeguard the capital markets from cyber attacks.

For the first time, here are a nutrition app that targets vulnerable groups, developed by researchers at ICRISAT, the app Gibsonify, can help nutrition program planners, health professionals, nutritionists, and local health and nutrition functionaries to feed data from communities get a diet plan in realtime.