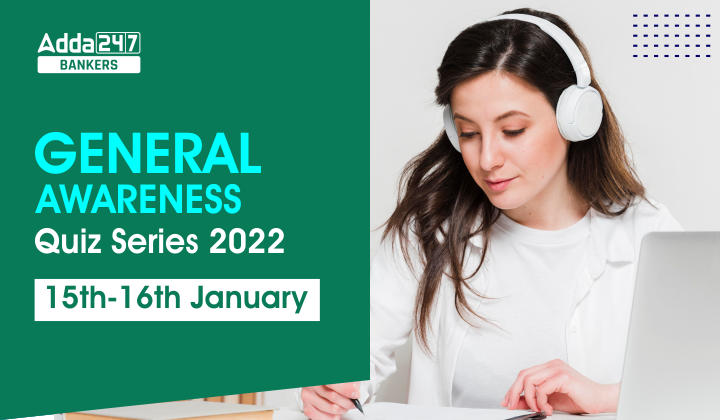 General Awareness Quiz Series 2023: 15th-16th January: Hello Students, General Awareness is an essential part of all government exams. It’s better to prepare this section daily and revise the same using the factsheet provided. Bankersadda team has brought you up a new series in which we will come up with 10 questions and answers, other options of the question have related news to them. So don’t miss reading the solutions

Q1. Which district has become the first ever district in India for on ground deployment of innovative 5G use cases offered by startups?

Q2. What is the theme of Voice of the Global South Summit?

(b) Unity of Voice

Q3. Mongeet is a festival of music, poetry, art, craft, food, culinary techniques, indigenous herbs, and culture is celebrated in which state?

(a) Garden Reach Shipbuilders and Engineers

(b) DRDO and BHEL

Q6. Startup firm IG Drones has developed a 5G-enabled drone that is capable of vertical take-off and landing, It belongs to which university?

Q7. Consider the following statements about “Soul of Steel” Challenge and choose the incorrect statement?

(a) the challenge will take place in the state of Uttarakhand

(c) It is started by CLAW Global

Q8. What is the purpose of Arogya Maitri project ?

(a) To provide essential medical supplies to below poverty line indians

(b)  To provide essential medical supplies to migrants

Q9. Who is popularly known as the ‘pocket dynamo’?

Vidisha, an aspirational district of Madhya Pradesh became the first ever district in India for on ground deployment of innovative 5G use cases offered by startups – a joint initiative by Vidisha District Administration and Centre for Development of Telematics (C-DOT), Department of Telecommunications (DoT) under the guidance of Additional Secretary (Telecom) & Administrator USOF.

Voice of the Global South Summit:

It was held under the theme – ‘Unity of Voice, Unity of Purpose’ – essentially envisages bringing together countries of the global south and sharing their perspectives and priorities on a common platform across a whole range of issues.

Aim of the summit

The ‘Saharsh’ was launched in 40 schools of the state on a pilot basis in August last year. This year, it will be extended to all government and aided schools in Tripura from the second week of January.

European officials and Swedish King Carl XVI Gustaf inaugurated the EU’s first mainland orbital launch complex. The European Union wants to bolster its capacity to launch small satellites into space with a new launchpad in Arctic Sweden. The new facility at Esrange Space Centre near the city of Kiruna should complement the EU’s current launching capabilities in French Guiana

Startup firm IG Drones, which was born out of the Veer Surendra Sai University of Technology (VSSUT) campus in Odisha’s Sambalpur has developed a 5G-enabled drone that is capable of vertical take-off and landing. As it’s a VTOL (Vertical Take-off and Landing), it can be operated from any terrain without the need for a conventional runway

In an effort to test one’s high-altitude endurance, a new challenge called “Soul of Steel” will be launched in India. Spearheaded by venture CLAW Global, which is run by veterans and supported by the Indian Army, the challenge will take place in the state of Uttarakhand and is similar to the “Ironman triathlon” long-distance triathlon challenge in Europe. The expedition will officially launch on January 14th, and will include 12 Indian participants and six international teams, with the age group for applicants being between 18 and 30 years

Prime Minister Narendra Modi announced a new ‘Aarogya Maitri’ project under which India will provide essential medical supplies to any developing country affected by natural disasters or humanitarian crisis and proposed to set up a ‘centre of excellence’ to facilitate development solutions to these countries. This was announced in concluding session of the Voice of Global South virtual summit, Modi also said that India will launch a ‘science and technology initiative’ to share its expertise with other developing nations.

Khashaba Dadasaheb Jadhav, an Indian wrestler, celebrated his 97th birthday on January 15 with a Google Doodle. Jadhav, a.k.a. “pocket dynamo,” is renowned for becoming the first athlete from an independent India to take home an Olympic medal

The United States candidate R’Bonney Gabriel has crowned Miss Universe 2022 at a ceremony held in New Orleans, Mexico. The crown was presented to her by India’s Harnaaz Kaur Sandhu who had won the 2021 title