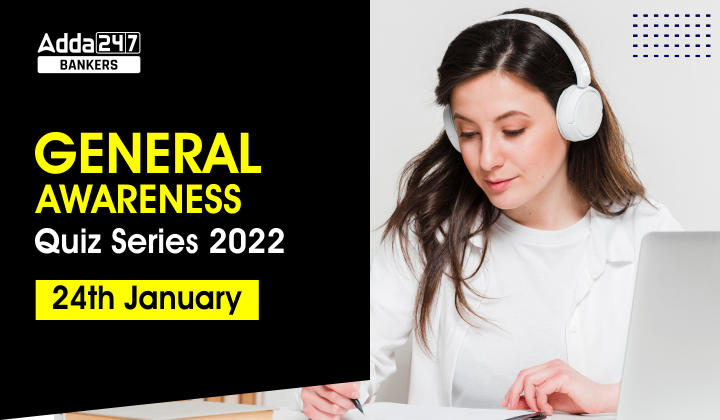 General Awareness Quiz Series 2023: 24th January: Hello Students, General Awareness is an essential part of all government exams. It’s better to prepare this section daily and revise the same using the factsheet provided. Bankersadda team has brought you up a new series in which we will come up with 10 questions and answers, other options of the question have related news to them. So don’t miss reading the solutions.

Q1.Consider the following statement about Pradhan Mantri Rashtriya Bal Puraskar
i. It is conferred by Prime Minister
ii. It is being conferred upon children in the age group 5 – 18 years
iii. It is given for excellence in six categories
Which of the above statement are incorrect?
(a) i only
(b) ii only
(c) iii only
(d) None of the above
(e) All of the above

Q7. Where will Shanghai Cooperation Organization Film Festival from the 27th – 31st of January, 2023 be organized ?
(a) Delhi
(b) Hyderabad
(c) Kolkata
(d) Mumbai
(e) Jaipur

S1. Ans.(a)
Sol. The Pradhan Mantri Rashtriya Bal Puraskar are being conferred upon children in the age group 5 – 18 years, for their excellence in six categories – Art and Culture, Bravery, Innovation, Scholastic, Social Service and Sports. This year, awards were presented in the categories of Art and Culture, Bravery, Innovation, Social Service and Sports. Each awardee is given a medal, a cash prize of Rs. 1 Lakh and certificate. This year, 11 children from across the country, under different categories of Bal Shakti Puraskar, have been selected for PMRBP-2023. The awardees include 6 boys and 5 girls, belonging to 11 States and UTs.

S5. Ans.(d)
Sol. Indian Navy’s fifth stealth Scorpene class Submarine INS Vagir was commissioned into the Indian Navy , 23 Jan 2023 at the Naval Dockyard Mumbai in the presence of Adm R Hari Kumar, Chief of the Naval Staff, the Chief Guest for the ceremony. Six Scorpene Class submarines are being built in India by the Mazagon Dock Shipbuilders Limited (MDL) Mumbai, under collaboration with M/s Naval Group, France. INS Vagir would form part of the Western Naval Command’s Submarine fleet and would be another potent part of the Command’s arsenal.

S6. Ans.(d)
Sol. For the year 2023, Odisha State Disaster Management Authority (OSDMA) and Lunglei Fire Station (LFS), Mizoram, both in the Institutional category, have been selected for the Subhash Chandra Bose Aapda Prabandhan Puraskar-2023 for their excellent work in Disaster Management.

S7. Ans.(d)
Sol. Ministry of Information and Broadcasting is organizing the Shanghai Cooperation Organization Film Festival from the 27th – 31st of January, 2023, in Mumbai, through the National Film Development Corporation. The SCO Film Festival is being organized to mark India’s Presidency at SCO.

S10. Ans.(e)
Sol. Ministry of Ayush has signed a Memorandum of Understanding (MoU) with India Tourism Development Corporation (ITDC), Ministry of Tourism, Government of India to work together for the promotion of Medical Value Travel in Ayurveda and other traditional systems of medicine.

When you try to solve the questions in GA, all the options in questions have some current news. Try to recall it. This quiz is for revision purpose.

What is called general awareness?