Access to All Banking Exams Courses!
Buy Now
READ ON APP
Home Uncategorized Goa General Knowledge for Bank/SSC Exams
Facebook
Twitter
Google+
Pinterest
WhatsApp
April 2, 2017
Dear Readers,
The knowledge of Static Awareness is very important for all govt. Examinations whether it is SSC, Banking or UPSC. The knowledge of Current Affairs and various important facts about different state can also give you an upper hand in interviews and cracking General Awareness section. Today, in brief, we will talk about the “Tourist Paradise” states in country i.e Goa. 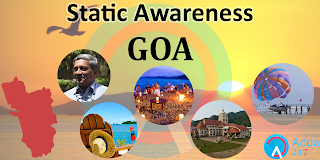 Goa, a tiny emerald land on the west coast of India, the 25th state of the Union states of India, was liberated from Portuguese rule in 1961. It was a part of Union Territory of Goa, Daman & Diu till 30th May 1987 when it was carved out of form a separate state. Goa covers an area of 3702 square kilometers and comprises two Revenue district viz North Goa and South Goa. Boundaries of Goa State are defined in the North Terekhol river which separates it from Maharashtra, in the East and South by Karnataka State and West by The Arabian Sea. Goa lies in Western Coast of India and is 594 Kms (by road) away from Mumbai city.

1. Mangeshi temple is the largest temple of Goa which is famous for Lord Mangesh which is incarnation of Lord Shiva.
2. Dudhsagar Falls which has a height of 310 m is one of the highest falls of India. It is on Zuari river.
CLICK HERE TO READ MORE ABOUT GOA
CRACK SBI PO 2017