Directions (1-5): Study the information carefully and answer the questions given below.
Six friends P, Q, R, S, T and U are from different places of India i.e. Manali, Dharamshala, Leh, Jaipur, Agra and Darjeeling. They all are planning to go on ride through different bikes i.e. Hero, Suzuki, Honda, Java, Bmw and Ktm. All information is not necessarily in same order.
R rides Java and he is from Manali. The one who rides Suzuki is not from Jaipur and Leh. P is from Darjeeling. The one who is from Agra rides hero. T rides Ktm. The one who is from Leh doesn’t ride ktm. U isn’t from Leh. P doesn’t ride Bmw and Suzuki. S is not from leh and Dharamshala.

Q2. T belongs to which of the following place?
(a) Jaipur
(b) Manali
(c) leh
(d) Dharamshala
(e) None of these

Directions (6-8): In each of the questions given below some statements are followed by some conclusions. You have to take the given statements to be true even if they seem to be at variance from commonly known facts. Read all the conclusions and then decide which of the given conclusions logically follows from the given statements disregarding commonly known facts.
Q6. Statements:
Some rock is stone.
All stone is wood.
Only few Marble are rock.
Conclusions:
I. Some rock is wood.
II. Some wood is marble.
III. No marble is stone.
(a) Only II is true
(b) Only I is true
(c) Only III is true
(d) Both I and III is true
(e) None of these

Directions (11-14): Study the information carefully and answer the questions given below.
There are seven persons in the family in three generation. S is daughter of G. E is mother of law of G. M is brother of P. E is sister in law of R. P is aunt of S. N is married. G is a married woman. 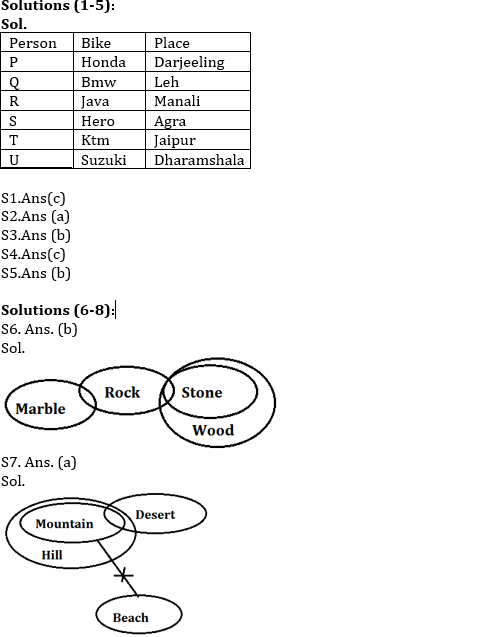 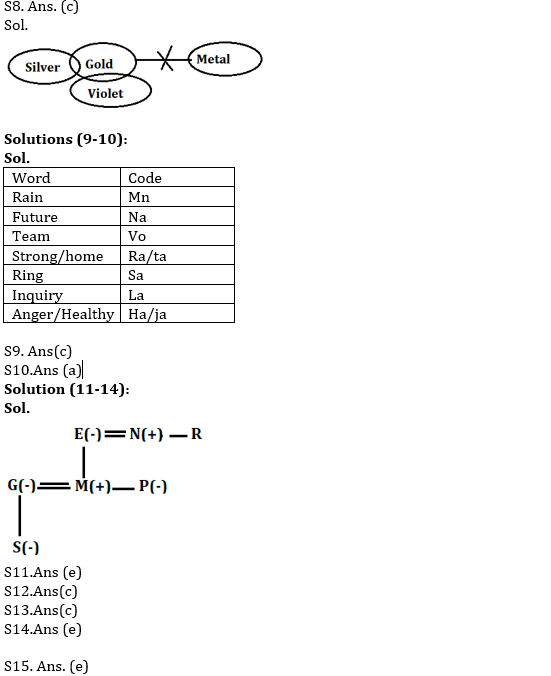