Directions (1-5): Study the following information carefully and answer the given questions.
A, B, C, D, E, F, G and H are sitting around a square table, four sit at corners while four sit at the middle of the sides. The ones who like colours face the centre while who like city face outside (not necessarily in same order). E faces outside the centre. A likes Delhi. H likes red colour and sits 3rd to the right of the one who likes Pune. C, who doesn’t like city, sits second to the left of H. F is not an immediate neighbour of C and H but likes blue colour. D sits second to the left of F. G likes Mumbai and the one who likes green colour sits immediate right of G. E is not an immediate neighbour of D. A doesn’t sit at corner. One of the persons likes pink colour. One of the persons likes Jaipur.

Q3. Who among the following sits exactly between F and the one who likes green colour when counted from right of F?
(a) D
(b) E
(c) B
(d) The one who likes red colour
(e) None of these 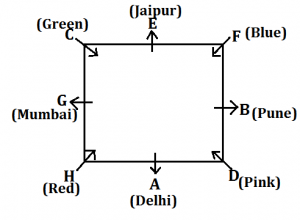 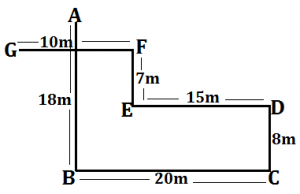