Q8. How many step required completing the above arrangement?
(a) Three
(b) Four
(c) Six
(d) Seven
(e) Five

Q14. Statement: Non-banking entities operating automated teller machines, known as white label ATM operators, are struggling to meet the targets set by the Reserve Bank of India.
Which of the following is the reason for the above statement?
(a) Non-bank entities are unable to find sponsor banks of such ATMs in small towns.
(b) White label ATM (WLA) operators do not fall directly under banking regulations.
(c) High transaction fees are charged by the WLA entities.
(d) The operating cost in the cities is high.
(e) There is stiff competition in the market from public sector banks.

Q15. Statement: To tone up the bureaucratic apparatus and weed out officials of doubtful integrity and efficiency, the government has asked all its departments to identify such public servants and move proposals for their premature retirement.
Which of the following can be concluded from the above statement?
(a) There will be voluntary retirement for the person who skips the office for a long time.
(b) Only Government service is made for those who can perform.
(c) Negligence of work in the office will lead to premature retirement.
(d) Efficiency of the government service will increase.
(e) Only (c) and (d) 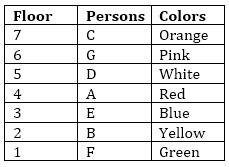 Sol.(6-10):
Let us understand the Logic behind this Question and let’s understand how to solve it.
When we see the each step, then we can find that there is both number and words are arranged in each Step. (1) For words arrangement- Words are arranged according to ascending order as in English dictionary. In first step the words which come first according to English dictionary arranged first to extreme left. And in second step next word is to be arranged in extreme right. And this process is continued in further
Step. (2) For number arrangement- There are three odd numbers and three even numbers. In first step lowest odd number arranged in extreme right and in second step lowest even number is to be arranged in extreme left and this process is continued in further step. (Each odd number is added by one (+1) while they are arranged and one is subtracted by each even number (-1) while they are arranged).
Input: there 8 will 7 be 24 no 29 significant 16 change 19
Step I: be there 8 will 24 no 29 significant 16 change 19 8
Step II: 7 be there will 24 no 29 significant 16 19 8 change
Step III: no 7 be there will 24 29 significant 16 8 change 20
Step IV: 15 no 7 be there will 24 29 8 change 20 significant
Step V: there 15 no 7 be will 24 8 change 20 significant 30
Step VI: 23 there 15 no 7 be 8 change 20 significant 30 will

S14. Ans.(a)
Sol. White label ATM (WLA) operators need a sponsor bank to load and mange cash in each WLA. So, (a) is a valid option.

S15. Ans.(e)
Sol. Officials are being made to retire prematurely. The retirement is not voluntary. So a) will be ruled out. Because of the word only b) will not be considered. The decision taken by the government will lead to improvement in government services and at the same time any negligence at workplace will lead to premature retirement. So, only c) and d) will follow.