Q5. Which of the following combination is true about V?
(a) More than four persons are attending seminar between V and M
(b) V goes 16th of the given month
(c) Q attends seminar immediate after V
(d) V is fourth heaviest person
(e) None is true 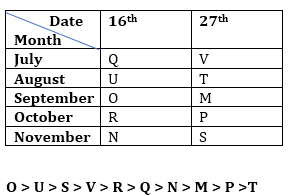