Institute of Banking Personnel and Selection Board has finally released the result for IBPS PO, Clerk and SO result. Every year the result for all these posts get announced on 1st April  but this year the result got delayed due to the outbreak of a pandemic. You can check  your final result from the official website of IBPS. In this article, we will be covering the total number of final vacancies in all these three posts against the notified vacancies.

The total number of vacancies which were reported in the official notification were 12075 but the final allotment is done on 18594. Thus indicating an increase of 6519 vacancies. We congratulate all the students who have fulfilled their dream of becoming a banker. This has been tough journey for you all but finally all the hard has finally paid off.

IBPS has notified 4336 vacancies this year for the recruitment of probationary officers but the final provisional allotment is done on 4783 vacancies. Given below is the final allotment list. 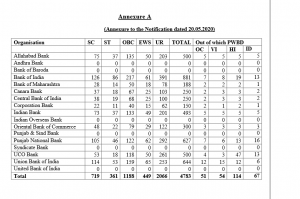 IBPS has released the final result for IBPS SO 2020. The number of vacancies which were notified in the official notification were 1163 while the final allotment has been made on 2188 vacancies. Thus an increase is seen in this recruitment as well.

Given below is the post wise increase in vacancy

You can also share your success story with us by filling the form given below: