Q10. Which of the following combination is true?
(a) G-Sun temple
(b) A-Tirupati temple
(c) B- Birla temple
(d) C- Jagannath temple
(e) None is true 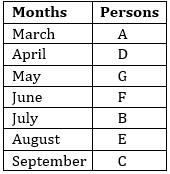