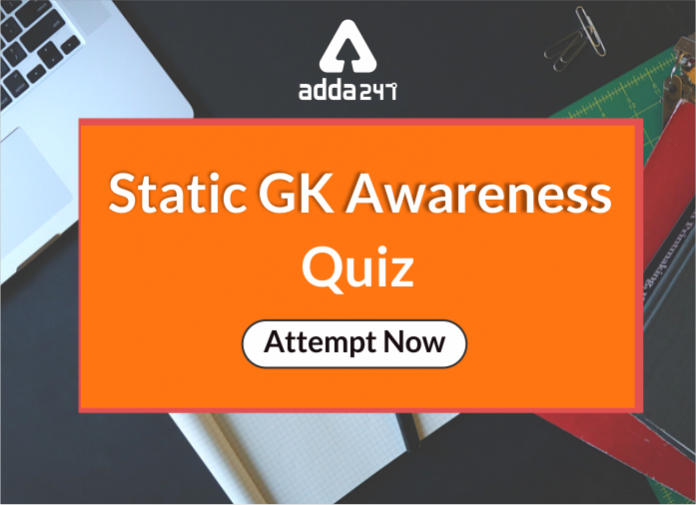 S2. Ans.(c)
Sol. Moscow is the capital city of Russia.

Q3. A mobile app was launched to help para-athletes to look up accessible places in Tokyo during their visit to the city for the 2020 Paralympics Games. Who is the present President of Paralympic Committee of India?
(a) Gursharan Singh
(b) J Chandrashekar
(c) Rajeev Mehta
(d) Narinder Dhruv Batra
(e) Abhay Singh Chautala

S5. Ans.(a)
Sol. Nirmaljit Singh Sekhon was awarded India’s highest wartime medal for gallantry, the Param Vir Chakra for his exploits in the field, and thereby, he became the only officer from the Indian Air Force to be decorated with the prestigious award.

Q6. India Meteorological Department (IMD) signed a Memorandum of Understanding (MoU) with the Indian Navy to hand over Cyclone Detection Radar (CDR) building to naval forces for meteorological purposes. Where is the headquarter of IMD?
(a) Pune
(b) Mumbai
(c) Bengaluru
(d) Hyderabad
(e) New Delhi

S7. Ans.(b)
Sol. The current President is Khalifa bin Zayed Al Nahyan and also the Commander in Chief of the UAE Armed Forces.

Q8. Public Enterprises Selection Board (PESB) has selected Pramod Agarwal as the next chairman of Coal India. Where is the headquarter of Coal India?
(a) Pune
(b) Kolkata
(c) Bengaluru
(d) Hyderabad
(e) Mumbai

S9. Ans.(e)
Sol. The Yaren is often assumed to be the capital city of Nauru.

Q10. The Appointments Committee of the Cabinet headed by Prime Minister has approved the extension of the tenure of Central Board of Direct Taxation(CBDT) Chairman. Who is the present Chairman of CBDT?
(a) Arun Kumar Jain
(b) Atulesh Jindal
(c) Pramod Chander Mody
(d) Shushil Chandra
(e) Rani Singh Nair

Q14. The Steel Users Federation of India has signed an MoU with the Bombay Stock Exchange to launch trading in steel futures. Who is the present Managing Director and CEO of BSE?
(a) Yusuf Hamied
(b) Ashish Kumar Chauhan
(c) Punit Goenka
(d) Vinita Bali
(e) Rajesh Gopinathan

S15. Ans.(b)
Sol. The present Minister of State (Independent Charge) of the Ministry of Shipping is Mansukh L Mandaviya.