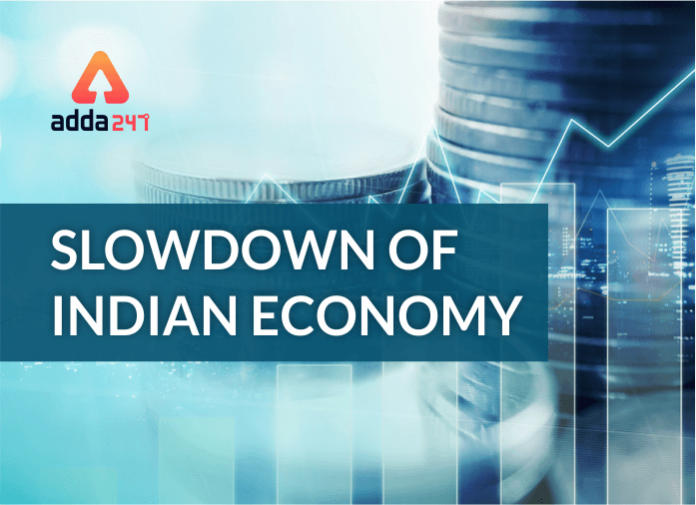 After years of fast-paced growth, the Indian economy is losing steam. The GDP growth of India came down to 5% which is the lowest in six years. The latest report of RBI has confirmed the rough hitten situation of the Indian economy. This is a major set back for a growing economy like India as it is indicating tougher times in the future. The internal crises in the Indian economy has gained general acceptance of downturn due to the recent collapse in automobile sectors, rising Non-performing assets (NPA), sluggish demand by consumer, and crash down of manufacturing sector.

The slow down in an economy has two factors: internal and external factors. It is believed by the economists that the break down of economy is the result of both the factors however the internal factors have more effect than external. This is the third economic slow down in India since Independence. Earlier this type of slowdown is being observed in June 2008 and March 2011.

Indian economy is suffering from a growth recession. A growth recession is a term in economics under which an economy continues to grow but at a very slow rate. The growth of the Indian economy is driven by the consumption factor. The consumption factor also includes Private Final Consumption Expenditure (PFCE) as well as Government Final Consumption Expenditure (GFCE). In the past few years, India’s consumption expenditure was high with an average growth rate of 7.8% in 2017-18 as compared to 6.1% in 2011-12. Fall in consumption has a direct impact on the price and employment level. The overall impact of this will be economic stagnation and price deflation.

The increase in NPAs has also worsened the situation as it is hitting our banking sectors. The merging of banks and other new reforms by the government may help in improving the NPA condition of the Indian banking system.

Other parameter of the Indian economy is investment. Indian GDP has investment as the main key driver component induced by both private and government sectors. However, the contribution of investment in overall growth is decreasing since last year. This lower investment is affecting the infrastructure development, demoralise small businesses, and consequently stagnates the technological development. To gain further growth, there is a need for innovation in the Indian economy.

The sink in the economy is also affected due to the external factors prevailing in the world around. The US-China trade war is one big exogenous reason which has contracted the world trade and in turn Indian exports. High rates of GST, NBFC’s liquidity issue, shift in workforce behavior all culminates in discouraging savings which in turn is not good for the economy.

However, there is scope of emerging out from this condition as itrecession is short-lived. The news of rising FDI from $12.7 bn to $16.3 bn has brought a bit of relaxation to the economy. The government has also revised GST for automobile sector, introduced FDI in manufacturing sector, and recapitalization of the banking sector.

There is a need of comprehensive corrective actions to be taken by govenrment so as to improve the health of Indian economy. Optimum utilization of funds by boosting investment in both research and infrastructure fields will also help in improving the economy condition in India. Also, focusing more on long-lasting structural changes can help a lot in improving the condition of economy in India.