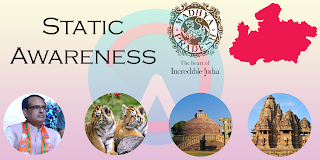 The knowledge of Static Awareness is very important for all govt. Examinations whether it is SSC, Banking or UPSC. The knowledge of Static Awareness and various important facts about different state can also give you an upper hand in interviews and cracking General Awareness section of SBI PO, NICL AO, NIACL Assistant and BOB PO 2017 Exam. Today, in brief, we will talk about the most naturally bestowed states in the country i.e. Madhya Pradesh.

As its name suggests, Madhya Pradesh is situated in the very heart of India. It shares its borders with five other states viz., Rajasthan in the north-west, Uttar Pradesh in the north, Gujarat in the west, Maharashtra in the south and Chhattisgarh in the north-east. Madhya Pradesh, with an area of 3,08,000 sq. km is the second largest state in India after Rajasthan. It is a part of the peninsular plateau of India lying in north central part, whose boundary can be classified in the north by the plains of Ganga-Yamuna, in the west by the Aravali, east by the Chhattisgarh plain and in the south by the Tapti valley and the plateau of Maharashtra.
Madhya Pradesh takes pride in having the country’s largest forest coverage of 94689.38 sq.km. Out of 94689.38 sq.km., 61886.49 sq.km. is reserved forest, 31098 sq.km. is protected forest and 1705.85 sq.km. falls under unclassified forest.

1. Bhopal is known as the city the city of lakes
2. 1st November is the state day of Madhya Pradesh
3. Madhya Pradesh is the second largest state by area
4. The Khajuraho Group of Monuments is a group of Hindu and Jain temples in Madhya Pradesh. They are one of the UNESCO World Heritage Sites in India.