The Reasoning Section is one of the scoring sections of the bank examination. If you clear your basics and practice more and more quizzes and also follow a proper study plan, you can easily crack the exam. RBI Assistant Exam is one of the most prestigious exams in the Banking Sector. 18th February 2020 RBI Assistant Mains Quiz Based on- Puzzle, Inequality and logical reasoning.

Direction (1-5): Study the following information carefully and answer the questions given below:
Seven persons of different posts i.e. CMD, Manager and Assistant of different ages i.e. 23, 27, 30, 32, 41, 44 and 55 (in years) work in different Companies i.e. Infosys, Wipro, Oracle, TCS, Maphasis, Mindtree and HCL. All information is not necessarily in same order. At least two persons are in each post. The person of prime numbered age doesn’t work in Oracle and Wipro. The persons who work in Infosys and HCL are in same posts, but both are not Manager. There is 5 years difference in ages of the persons work in Mindtree and Wipro. The age of the person who is manager in TCS is divisible by 3. Youngest person is not CMD. The age of the person who works in HCL is divisible by 5. The persons of even numbered age are in same posts. The age difference between the persons work in Wipro and Infosys is 9 years. The post of youngest and oldest person is not same.

Q2. The one who is oldest person, works in which of the following company?
(a)TCS
(b)HCL
(c)Mindtree
(d)Oracle
(e) None of these

Q4. The one who is manager works in which company?
(a) Infosys
(b) HCL
(c) Oracle
(d) Mindtree
(e) Maphasis

Q11. Statements: Instead of burning the leaves, bury them in compost pits, by which it gets converted to natural manure, making it beneficial for the soil. A notice issued in public interest by Department of Environment
Assumptions:
I. Whenever leaves are burnt in the open, the air gets laden with tiny particulate matter which raises air pollution to alarming levels, which cause severe respiratory disorders and eye infections to those exposed to it.
II. Benefits gained from ashes of leaves burnt are not as much as the benefits gained from the natural manure obtained from leaves by burring it.

Q12. Statements: “A tempting cup of garma Georgia now awaits you at every street corner. So, no matter whom you are or where you go, a Georgia Vending Machine will hand you the same clean, delicious cup of tea in Regular, Adrak, Elaichi and Masala and if you’re looking for a change try the Regular, Mocha and Cappuccino coffee. One sip will make you realize why every other alternative is a mere compromise!” ____ An advertisement
Assumptions:
I. Most of the people need delicious cup of tea or coffee with a change in taste.
II. Every person is addicted to either tea or coffee.

Q13. Statements: “If you ask me about the daunting challenges that I face, I would say that my government’s first priority is to improve the existing law and order situation. Then follows the issue of prices of commodities.” ___ Mr. ROY, a newly appointed PM of country CLINTON
Assumptions:
I. If a citizen of country CLINTON can sleep peacefully, he/she can then think of providing food to his/her family, ponder over education and move about freely in the country.
II. Prices of the commodities affect the common man greatly. 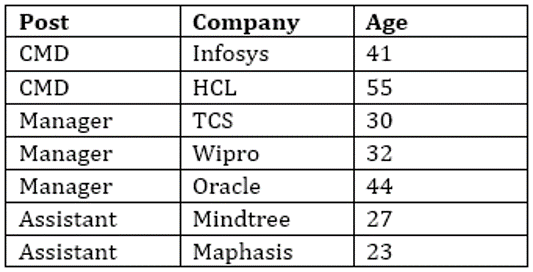