The Reasoning Section is one of the scoring sections of the bank examination. If you clear your basics and practice more and more quizzes and also follow a proper study plan, you can easily crack the exam. RBI Assistant Exam is one of the most prestigious exams in the Banking Sector. 20th February 2020 RBI Assistant Mains Quiz Based on- Puzzle, Syllogism and Input-Output.

Directions (1-5): Study the information carefully and answer the questions given below.
Seven banks conduct entrance exam on seven different dates of the seven different months starting from March to September of the same year.
SBI conducts exam on the date which is completely divisible by 3 and 4, and in the month, which has odd number of days. HDFC conducts exam in the month which has even number of days and on the date, which is square of the even number. More than two banks are conducting exam after ICICI bank. OBC conduct exam 15days after BOB’s exam and in the month, which have 31days. Three banks conduct their exam between PNB and OBC. ICICI does not conduct exam in March. Difference between the dates of HDFC and PNB is 9. PNB conducts exam before ICICI and on the date which is square of an odd number. The bank which conducts the exam on the 21st of the month, takes it immediately after the OBC Bank. Difference between the dates of SBI and RBI is 9. The bank which conducts exam in August conducts on 7th of the month. ICICI bank conducts exam on 6th of the month.

Q2. SBI conducts exam in which of the following month?
(a) May
(b) March
(c) September
(d) August
(e) None of these 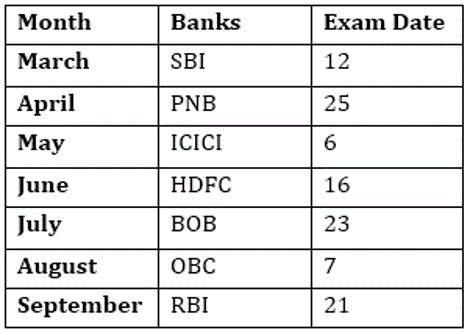