RBI has released advertisement for 926 posts of Assistant. Do not let this opportunity slip away. Adda 247 will provide you daily English Mock of “RBI Assistant Prelims English Mini Mock 11th February 2020. From now on, Adda 247 will provide students with Mini Mocks for RBI Assist Mini Mocks will help you to practice maximum topics in minimum time. In today’s Mini Mock 5, we have a Sentence Based Error + Column Based Filler + Word Usage. Stay tuned with Bankersadda to get  English Quiz and boost your preparation for the upcoming bank exam. You can also prepare with the study plan for  RBI Assistant available on the Bankersadda website.

Directions (6-10): There are three sentences given in each of the following question. Find the sentence(s) which is/are grammatically correct and meaningful and then mark your answer choosing the best possible alternative among the five given below each question. If all sentences are correct, choose option (e) i.e., “All are correct” as your answer.

Q6. (I) Meeting the threat of the Wuhan coronavirus, 2019-nCov, will be a test case for the effective and widespread deployment of artificial intelligence (AI) but fights against epidemic diseases.
(II) A movie with no closure at the end of it would be considered incomplete, since every story needs a proper conclusion.
(III) Nathan smiled when his crush gave him a compliment about his new haircut.
(a)Only (III)
(b)Both (I) and (II)
(c)Both (II) and (III)
(d)Both (I) and (III)
(e)All are correct

Q7. (I)No sooner did I take a dose of medicine that I started feeling better.
(II)Ramesh ordered his servant to bring him some hot milk as he has to take some medicines.
(III) Formed in 2002, IADI, a forum for deposit insurers from around the world, works in close coordination with the Basel Committee on Banking Supervision and produces research and guidance on deposit insurance.
(a)Only (II)
(b)Only (III)
(c)Both (I) and (III)
(d)Both (II) and (III)
(e)All are correct

Q8. (I) There is a great deal of humdrum work, which has to be done every day, in the process of obtaining information and analysing it.
(II) The ministry of defence official who interacts with the industry explicitly spelt out in a seminar of the Federation of Indian Chambers of Commerce and Industry in June that the private sector must export to survive.
(III) If large oil producers does not cut production, the downside for oil prices could be considerable.
(a)Only (I)
(b)Both (I) and (III)
(c)Both (II) and (III)
(d)Both (I) and (II)
(e)All are correct

Q9. (I)Shakespeare was undoubtedly the greatest master the English language has ever known and, quite probably, will ever know.
(II) Suddenly the angry, squirrel-like expression of the princess’ pretty face changed into a winning and piteous look of fear.
(III) He served as chairman of many commissions dealing with public health, prohibition, and labour.
(a)Both (I) and (III)
(b)Only (I)
(c)Only (III)
(d)None is correct
(e)All are correct

Q10. (I) The principal structures include the municipal buildings, corn exchange, library, public hall, and the market cross.
(II) Wine is manufactured in large quantities, but the output is not sufficient to meet the home demand.
(III) Fight communicable disease and responding to epidemics is clearly an area where private responses do not suffice, but where governments are required.
(a)Only (I)
(b)Only (III)
(c)Both (I) and (II)
(d)Both (II) and (III)
(e)All are correct

Directions (11-15): In the following questions, a word is given in bold followed by three sentences. Choose the appropriate option mentioning the sentence(s) that uses the highlighted word in a grammatically correct and contextually meaningful manner.

Q11. Livelihood
(I) With businesses shut, fields untended and fishing abandoned many have lost their livelihoods as well as their homes, our correspondent says.
(II) People who do not travel into cities to work are much less likely to livelihoods restaurants, theatres and shops.
(III) The streets of Saigon livelihoods with people, noises, and smells like no other city in Asia.
(a) Only (I)
(b) Both (I) and (III)
(c)Only (II)
(d)Both (I) and (II)
(e)None of these

Q12. Capricious
(I) The taiga and tundra of this region capricious with birds and animals, and bloom with wildflowers in early summer.
(II) Her admirers were capricious, returning to her at times, and then holding aloof again; and as for suitors, they entirely disappeared.
(II) Sponsorships like these keep the store’s name firmly in the minds of local bow hunters and motivate them to capricious the store.
(a) Both (I) and (III)
(b) Only (II)
(c) Only (I)
(d) Both (I) and (II)
(e) None of these

Q13. Innate
(I) The songs are a little more raw this time around, though not drastically enough to innate long-time fans.
(II) It’s obvious that bad character traits such as anger, jealousy, and pride innate a person from others.
(III) In other words, one of our most essential abilities as humans, reading is the product of a combination of innate and learned traits.
(a)Both (I) and (III)
(b)Only (I)
(c)Only (III)
(d)Both (I) and (II)
(e)None of these

Q14. Decorum
(I)Wishing to observe the rules of decorum she invited him to stay for supper, though absolutely nothing had been prepared for a guest.
(II) Although I deal with people at all levels, I maintain a level head and a certain level of decorum even when I am very friendly with colleagues.
(III) Sadie decorum acknowledgement that the woman was her mother.
(a)Both (I) and (III)
(b)Only (I)
(c)Only (II)
(d)Both (I) and (II)
(e)None of these

Q15. Infallible
(I) In its native habitat, the Canary Islands, the bird is a nondescript greenish songster with a melodious infallible .
(II)But conductors are no more infallible than other people, and once in a blue moon in going through a train they miss a passenger.
(III) As box-office receipts have proven that he is no longer infallible, it should be a breeze to walk up to him and become his friend in a jiffy
(a)Both (I) and (III)
(b)Only (I)
(c)Only (II)
(d)Both (II) and (III)
(e)None of these

S7. Ans. (b)
Sol. Among the given statements, only the third sentence is grammatically correct. There are grammatical mistakes in both the first and the second sentences. In the first sentence, the word “that” should be replaced by “than” as No sooner is always followed by than to make the sentence grammatically correct. No sooner is used for saying that something happens immediately after something else.
e.g. No sooner had I closed my eyes than I fell asleep.
In the case of the second sentence, the verb “has” will be replaced by “had” because when Reporting Speech is in past tense, the Reported Speech will also be in past tense.
Hence option (b) is the correct choice.

S8. Ans. (d)
Sol. Both the statements (I) and (II) are grammatically correct. However, there is an error in the third sentence. In the case of the third sentence, ‘does not’ will be replaced by ‘do not’.
Hence option (d) is the correct choice.

S9. Ans. (e)
Sol. All the given statements are grammatically correct. Hence option (e) is the correct choice.

S10. Ans. (c)
Sol. Both the statements (I) and (II) are grammatically correct. However, there is a grammatical error in the third sentence; ‘Fighting’ will replace ‘fight’ in the third part. So, the correct sentence would be ‘Fighting communicable disease and responding to epidemics is clearly an area where private responses do not suffice, but where governments are required.’
Hence option (c) is the correct choice.

S11. Ans. (a)
Sol. ‘Livelihood’ means ‘the financial means whereby one supports oneself’. So the correct option is option (a).

S12. Ans. (b)
Sol. ‘Capricious’ means ‘given to sudden and unaccountable changes of mood or behaviour’. So the correct option is option (b).

S15. Ans. (d)
Sol. The term ‘infallible’ refers to ‘incapable of failure or error’. So the correct option is option (d). 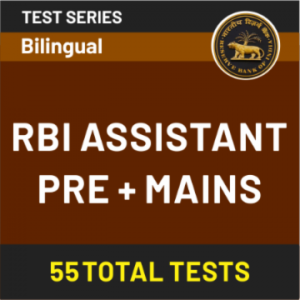 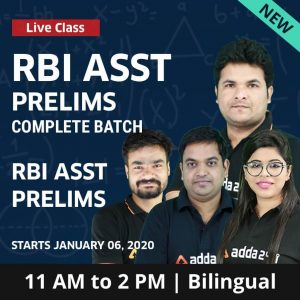 All the Best BA’ians for RBI Assistant Prelims