Directions (1-5): Study the following alphanumeric series carefully and answer the questions given below:

STEP I- The consonants which are preceded by an alphabet and followed by a symbol are rearranged in the beginning of the series (before 6) in alphabetical order.

STEP II- The consonants which are preceded by a number is replaced with its eighth next letter in the alphabetical series. (for ex. If B is that consonant, it will be replaced by J)

STEP III- Two is subtracted from the numbers which are not followed by another number.

Q8. Statement: A huge truck collided with an elephant trying to cross the highway road running across the forest causing a heavy traffic jam.
Course of action:
I. High voltage electric wires should be used to fence all the state highways.
II. People should be advised to avoid using the route effected by collision till the highway is cleared.

Statement- As an emerging economic superpower, it is quite tragic that more than one in three children in India are stunted. Stunting is associated with an underdeveloped brain, with long-lasting harmful consequences, and increased risks of nutrition-related chronic diseases, such as diabetes, hypertension, and obesity in future. Thus, stunting can be classified by itself as an illness as it leads to negatively affecting the present and future of the child.
(I) Higher economic growth and increased spending on nutrition access programme have not resulted in proportionate decrease in child malnutrition or stunting.
(II) Multiple researchers have proven the link between illness and malnutrition/ stunting in children.
(a) Both I and II strengthens
(b) I strengthen while II weakens
(c) II strengthens while I weaken
(d) Statement I strengthen while Statement II is neutral.
(e) Both I and II weakens.

Direction (10): In the following question a statement is given followed by three assumptions numbered as I, II and III. You have to read all the statements and decide which of them follows the argument mentioned in statement.

Q10. Rooftop solar power growth has demonstrated an overall positive trend, But this will need to be scaled up massively to achieve the national target.
Assumption:
(I)With ongoing improvements to solar cell efficiency and battery technology, rooftops will only get more attractive in the future.
(II)Major solar projects that connect to the grid often face the challenge of land acquisition and transmission connectivity.
(III)A survey helps determine usable rooftops, separating them from green spaces, and analyses the quality of the solar resource.
(a) Only II follows
(b) Both II and III follows
(c) Both I and III follows
(d) Only I follows
(e) Both I and II follows

Directions (11-15): Study the following information carefully and answer the questions given below:
There are eight persons A, B, C, D, R, S , U, and W are sitting around a rectangular table in such a way that four of them sit at four corners of the Table while four sit in the middle of each of the four sides. The one who sit at the four corners face outside the centre while those who sit in the middle of the sides face inside. All of them have different age viz. 18 yr, 19yr, 20 yr, 21 yr, 22 yr, 23 yr, 24 yr and 25 yr but not necessarily in the same order.
S sits third to the right of D whose age is a prime number. There are three persons sit between S and W. U who is 22 yr old, is second to the left of S. R sits opposite to U. A is younger than U. Three people sit in between B whose age is a perfect square and the one whose age is 21 yr old. U is immediate neighbor of B. A’s age is a prime number. S is elder than W who is not youngest among all the persons. D who is immediate right of R is not facing towards A.

S6. Ans.(b)
Sol. Automation reduces the need of manpower. So, statement-II is the cause and statement-I is its effect.

S7. Ans.(b)
Sol. Action I is not appropriate because it is too harsh a course of action. Action II is appropriate in order to maintain discipline.

S8. Ans.(b)
Sol. Action I is not appropriate because of the word ‘all’. Action II is helpful in reducing the inconvenience caused to the public.

S9.Ans. (d)
Sol. Statement I strengthen the given statement as even the economic growth is higher the problem of stunting is keep on increasing among children. But statement II is neutral statement. 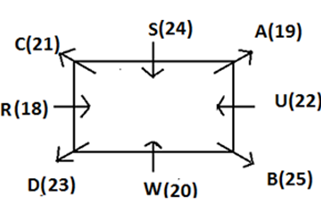