Q3. Four of the following five are alike in certain way based from a group, find the one that does not belong to that group?
(a) Pineapple, Guava
(b) Apple, Grapes
(c) Banana, Orange
(d) Mango, Pineapple
(e) Mango, Apple

Q4. Which of the following boxes are not adjacent to each other?
(a) Pineapple, Mango
(b) Orange, Grapes
(c) Apple, Banana
(d) Orange, Pineapple
(e) Litchi, Grapes

Q5. Which box is immediate above the box of Banana?
(a) Orange
(b) Grapes
(c) Pineapple
(d) Guava
(e) Litchi

Q7. If all the numbers are arranged in ascending order from left to right then, which of the following will be the sum of all the three digits of the number which is 4nd from the right in the new arrangement?
(a) 10
(b) 19
(c) 8
(d) 16
(e) None of these

Q10. If one is added to the second digit of each of the numbers and one is subtracted to the third digit of each number then, how many numbers thus formed will be divisible by three in new arrangement?
(a) None
(b) Four
(c) Two
(d) Three
(e) One

Q15. Pointing to a lady, Dinesh says to his only Brother, “She is daughter of my mother’s only daughter in law”. Dinesh’s brother is unmarried. How is the lady related to Dinesh?
(a) Brother
(b) Daughter-in-law
(c) Sister
(d) Daughter
(e) Wife 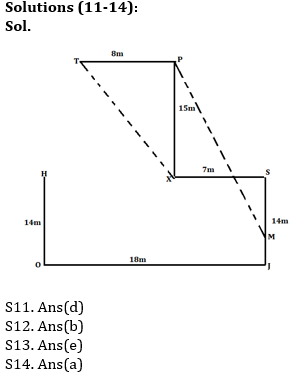