Directions (1-5): Study the information carefully and answer the questions given below:
There are seven persons i.e. P, Q, R, S, T, U and V are going to the mall on different days of the same week from Monday to Sunday but not necessarily in the same order. All the persons like different colours i.e. Red, Blue, Black, Green, Yellow, Orange and White again not in the same order. R goes on Thursday and likes black colour. Two persons go between R and the one who likes Orange colour. Three persons go between P and T who likes white colour. P does not like orange colour. The person who likes white colour goes before the one who likes black colour. T does not go on Monday. S goes immediately after the one who likes red colour. Two persons goes between V and U who likes yellow colour. P does not like green colour.

Q3. Which of the following combination is true?
(a) Monday- P-Yellow
(b) Tuesday-U-Orange
(c) Friday-V-Green
(d) Wednesday-Q-Red
(e) None is true

Q4. Four of the following five are alike in certain way based from a group, find the one that does not belong to that group?
(a) U-Black
(b) R-Green
(c) Q-Yellow
(d) S-Black
(e) P-Red 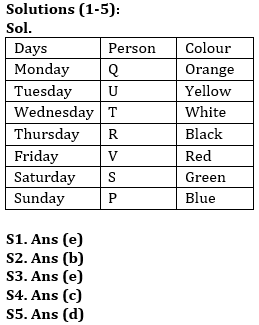 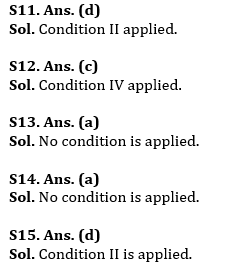