Directions (6-7): Study the following information carefully to answer the given questions:
Pollution control can no longer be viewed as a national problem to be addressed by individual countries on the basis of national sovereignty. As the international effects of the Chernobyl nuclear accident make clear, pollutants do not respect political boundaries; thus, every nation has a legitimate stake in the environmental practices and policies of its neighbours.

Q7. Which of the following, if true, most strongly supports the view expressed in the passage?
(a)Acid rain from factories in the mid-western United States pollutes lakes in Canada.
(b)Soviet leaders refused western reporters access to safety records after the Chernobyl accident.
(c)Neighboring states within the United States are often unable to agree on joint pollution control efforts.
(d)Existing international bodies have no authority to impose pollution control regulations on member-nations.
(e)Fishers form Japanese fleets have increasingly depleted fish supplies in United States’ territorial waters.

Q8. Statement: Despite strong opposition, the controversial Prohibition of Forcible Conversion of Religion Bill was passed by the Tamil Nadu Assembly with the AIDMK and the BJP outvoting the combined opposition of the DMK, the Congress, the TMC and the Left parties. –A news
Assumptions: I. Conversion creates resentment among several sections and also inflames religious passions, leading to communal clashes.
II. Conversions only lead to the isolation of the converted.
III. Strong opposition has put hindrance before a bill in taking final shape.
(a) All I, II & III
(b) Only I & II
(c) Only I & III
(d) Only II & III
(e) None of these

Q9. A person takes 130 minutes to reach office from his home and he started at α® but on the way to his office he met his friend and reached office 35 minutes late. So, at what time he reached office?
(a)µβ
(b)∞β
(c)®©
(d)©β
(e)None of these 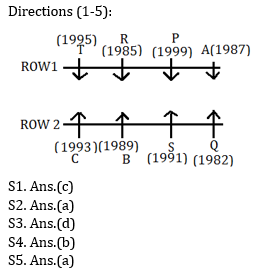 S6. Ans.(c)
Sol. The argument is leading up to call for some sort of international agency to control pollution, which, as the author claims, is an international problem. Thus (c) is the best response.

S7. Ans.(a)
Sol. The author cite one example of international pollution, so another example would help strengthen his claim. (a) provides such an example.

S8. Ans.(c)
Sol. III is implicit. Note that the statement is a piece of news. What the journalist assumes about the conversion and its impact can’t be explicitly said. But the words “despite strong opposition” indicate that the journalist must be assuming III. I also follows as it is given that despite strong opposition, the controversial prohibition of forcible conversion of regional bill was passed by Tamil Nadu assembly. 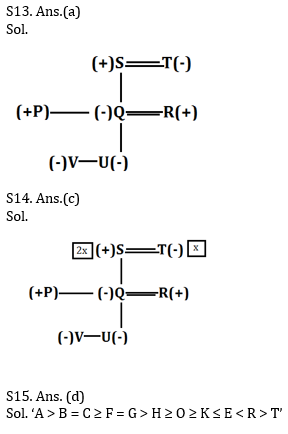