Q6.Statement-The Union health ministry has made Aadhaar a compulsory document for tuberculosis patients to be able to avail treatment under the government’s Revised National Tuberculosis Control Programme (RNTCP).
(I)A person cannot take treatment of TB without Aadhar card.
(II)Patients suffering from TB will be unable to get cash benefits under a central government scheme till they produce their Aadhaar card.
(III)An individual eligible to receive the benefit under the scheme, is hereby, required to furnish proof of possession of Aadhaar number or undergo Aadhaar authentication.
(IV)The World Health Organisation(WHO) recently said that tuberculosis epidemic in India was “larger” than what had been previously estimated.

Which of the following could be the outcome of the given statement?
(a)Only II
(b)Only I and III
(c)Only II and III
(d)Only I
(e)None of these

Q7. Statement-The Captain Amarinder Singh-led government in Punjab has announced free education for girls in government schools and colleges from Nursery to PhD.
(I)Good social welfare law. It is initially for girls as they are comparatively disadvantaged. Hopefully it will soon be followed by free education for everyone.
(II)It is gender biased as if a poor or average person wants to educate his son for higher education he has to pay higher bills. If you are introducing a law / scheme / bills under no circumstance it should not favour any particular gender, if they are really concerned about education.
(III)Do not differentiate a poor or average person on gender. A poor boy or man should also get free education as well.

Q8. Statement-Government plans a new social media policy to check anti-India activities, if it is being “misused” to conspire against India and spread anti-national propaganda.
(I) At present, there is only a set of “do’s and don’ts” for the social media which needs to be graduated to a full-fledged guidelines that should be adopted on such a network.
(II) The move assumes significance as there have been instances where terrorists were found to be using social media to conspire against the country or to propagate anti-India materials.
(III) There have also been instances where rumours spread on the social media had resulted in violence and tense situation in different parts of the country.
(IV) The misuse of social media is more challenging especially with reference to the situation in Jammu and Kashmir, because only social media is responsible to encourage terrorism in Jammu and Kashmir.

Directions (9-11): Study the following information carefully and answer the questions given below:
There are eight family members and three generations in a family. V is the grand-daughter of P. K is the sister-in-law of R. Q is the mother-in law of G. H is the brother-in law of P and is unmarried. G is married to R and is the father of V. M is the brother of R. G has no siblings and is not the son of P.

Directions (12-15): Study the following information carefully and answer the questions given below:
Ten persons are sitting in two parallel rows facing each other. A, B, C, D and E sits in row 1 and faces South. P, Q, R, S and T sit in row 2 and faces north. Each of them has different salaries i.e. 6k, 7k, 8k, 9k, 10k, 12k, 15k, 18k, 19k, 20k but not necessarily in the same order. There are two persons sitting between E and C whose salary is second lowest. A is not facing R and do not earn the highest salary. Q is sitting second to the right of P and is not facing either E or C. R is facing the person whose salary is a multiple of 5. B who is not an immediate neighbor of E is sitting at one of the extreme ends of the line. T who is not facing B and is not getting the highest salary is second to the left of P. Salary of A is double the salary of B but not 18k. S whose salary is 1k lesser than the salary of D is not an immediate neighbor of T and is not getting 19k. Q is getting salary more than S and less than E who is not getting the second highest salary. R is getting a salary of 8k. Difference between the salaries of Q and P is 5k.

Q14. Which of the following is false regarding S?
(a)S is facing C
(b)Salary of S is more than that of B
(c)R is sitting second to the left of S
(d)S is at extreme end of the line
(e)P is an immediate neighbor of S 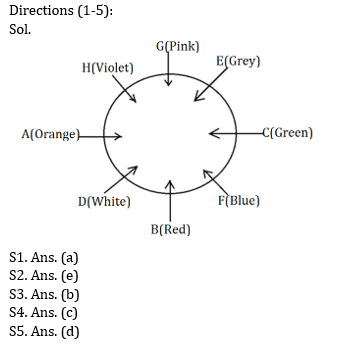 S7. Ans.(c)
Sol. For I- This argument does not hold strong because this initiative is for girls to get benefited initially but it is not like that education will make free for everyone.
For II-This argument also holds strong because a law/scheme or bill should not be for any particular gender, but it should be for the one who really need it.
For III-This is also strong because gender should not be the criterion for the free education. It is the poor who should get the benefits. 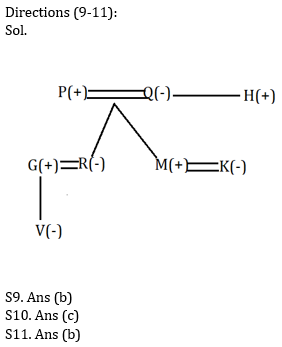 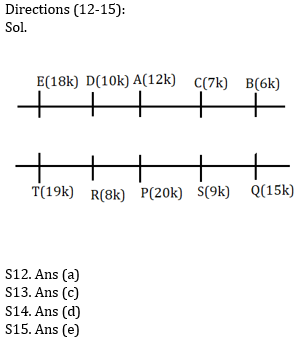