Q3. Which of the following statement is not true as per the given information?
(a) Both F6 and B2 sit opposite to each other
(b) No one sits to the immediate left of D4
(c) D4 likes Ananya
(d) C3 likes Varun
(e) All are true

Directions (6-7): Study the following information carefully to answer the given questions:
Pollution control can no longer be viewed as a national problem to be addressed by individual countries on the basis of national sovereignty. As the international effects of the Chernobyl nuclear accident make clear, pollutants do not respect political boundaries; thus, every nation has a legitimate stake in the environmental practices and policies of its neighbours.

Q10. Statement- India is buying over 1,000 new planes. However unprecedented expansion will place immense pressure on the aviation system. The industry currently appears to be underestimating the challenges ahead.
Which of the following could be the reason for the concerns about “challenges ahead” in the above statement?
(i) The buying frenzy, led by budget airlines like SpiceJet and IndiGo, is not without reason. Around 220 million Indians flew last year — an annual increase of 20%.
(ii) The country is on track to overtake the U.K. as the world’s third-largest aviation market by 2026.
(iii) Only 75 out of 400 airports are currently operational in India and even the biggest hubs like Mumbai, New Delhi and Chennai are bursting at the seams.
(a) Only (i)
(b) Both (i) and (ii)
(c) Only (iii)
(d) Both (ii) and (iii)
(e) None of these.

Q11. Statement- More than 9 million high-school students across China are taking the biggest exam of their lives known as the gaokao, this week. For millions of teenagers, it’s a big source of stress. For many businesses, it’s a great chance to make money.
Which of the following statements/facts substantiates the importance of this test for Chinese people?
(i) The grueling test determines where the students can go to university and what they’ll study.
(ii) Parents are willing to loosen the purse strings to try to ensure success, splashing out on private tutors, good luck charms and even luxury hotels.
(iii) Chinese students have also begun spending more on drugs and dietary supplements that they believe will improve their memory and attention.
(a) Only (i)
(b) Both (i) and (ii)
(c) Only (iii)
(d) Both (ii) and (iii)
(e) All (i), (ii) and (iii)

Q12. Statement-Controversial Calcutta High Court judge C S Karnan ended his tenure as a fugitive from law with no customary farewell being given to him. Sixty-two-year-old Justice Karnan has been evading arrest since May 9 after being sentenced to six months imprisonment for contempt of court by the Supreme Court.
Which of the following is not in line with the above statement?
(I)Earlier, the apex court had issued a bailable warrant against him to secure his presence in the contempt case.
(II)Despite several attempts, Justice Karnan has failed to get any relief from the apex court’s vacation benches which refused to hear his plea seeking a stay of its jail term order.
(III)He is, of course, first to be ordered arrested while holding the constitutional office of a high court judge.
(a)None of the above
(b)Both (I) and (II)
(c)Only (II)
(d)Both (I) and (III)
(e)All of the above 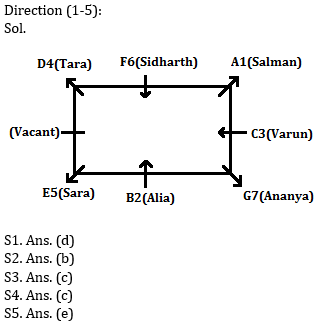 S6. Ans.(c)
Sol. The argument is leading up to call for some sort of international agency to control pollution, which, as the author claims, is an international problem. Thus (c) is the best response.

S7. Ans.(a)
Sol. The author cite one example of international pollution, so another example would help strengthen his claim. (a) provides such an example. 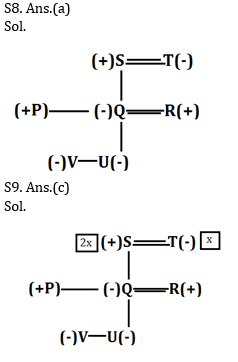 S10. Ans.(c)
Statement (i) and (ii) states a fact that supports this buying frenzy being carried out by aviation companies. Whereas (iii) clearly mentions that lack of infrastructure will be a major challenge that aviation companies might have to face in future.

S11. Ans.(e)
Sol. (i) states a fact that this test will determine the future career of the students and thus have a significant importance for them. The fact that parents are spending a lot of money to ensure the comfort of their children and the students spending money on supplements signifies the importance of this test, so (ii) and (iii) substantiates the statement.