Q7. In class of 40 students what is the rank of Vibhav from bottom?
Statements:
I. Mahesh is 8th from the top.
II. Vibhav sits after Mahesh with the gap of 5 persons.

Q9. How many sisters does P have?
Statements:
I. T has only three children. N is the brother of P and son of T.
II. Q is the mother of S, who is the sister of N.

Q11. Statement: Despite strong opposition, the controversial Prohibition of Forcible Conversion of Religion Bill was passed by the Tamil Naidu Assembly with the AIDMK and the BJP outvoting the combined opposition of the DMK, the Congress, the TMC and the Left parties. –A news
Assumptions: I. Conversion creates resentment among several sections and also inflames religious passions, leading to communal clashes.
II. Conversions only lead to the isolation of the converted.
III. Strong opposition has put hindrance before a bill in taking final shape.
(a) All I, II & III
(b) Only I & II
(c) Only I & III
(d) Only II & III
(e) None of these 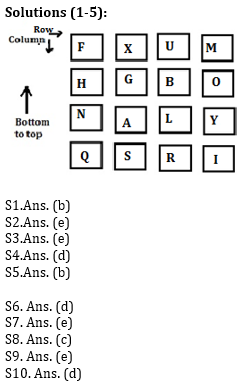 S11. Ans.(c)
Sol. III is implicit. Note that the statement is a piece of news. What the journalist assumes about the conversion and its impact can’t be explicitly said. But the words “despite strong opposition” indicate that the journalist must be assuming III. I also follows as it is given that despite strong opposition, the controversial prohibition of forcible conversion of regional bill was passed by Tamil Nadu assembly.