Q6. Statements:
Only a few Mango is Juice
Some juice are Orange
No Juice is Onion
Conclusion:
I: All orange can never be onion
II: All mango can be onion

Q8. Statements:
All Red are Green
Some green are Pink
No Red is White
Conclusions:
I. Some Pink are not white
II. Some Green are not white

Directions (12-13): Study the information carefully and answer the questions given below.
J, K, L, M, N and O are six members of a family. There are equal numbers of male and female in the family. J is the son of M and N is the daughter of J. K is the child of L who is the mother of N. O is paternal grandmother of K. 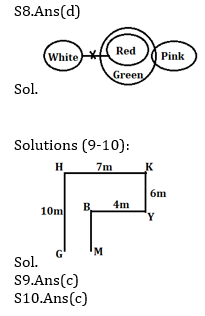