Direction (1-5): Study the following information carefully and answer the questions given below:
Eight persons from different cities sit in three rows facing south as per the diagram given below.

Q7. Among A, B, C, D and E each one of them has different height, who among the following is the second shortest?
I. D is taller than A and B
II. E is shorter than C and taller than D

Q9. Among A, B, C, D, E and F are sitting in a circle facing center, who among the following person sit immediate right of D?
I. A faces B. only one person sit between B and D.
II. D sits second to the right of A, Who Sits immediate left of C. 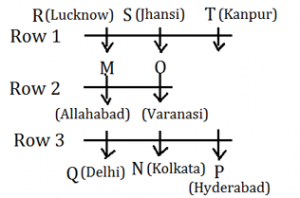 S10. Ans(e)
Sol. From statement I and II we can find box B is placed immediately above Box H.