Q2. Four of the following five are alike in a certain way based on their seating positions in the above arrangement and so from a group. Who among the following does not belong to that group?
(a) U
(b) Q
(c) The one who was born in 2010
(d) The one who is 21 years old
(e) W

Q7. Statement: Majority of the students in many schools do not pass in the final examination.
Courses of action
I. These schools should be closed down as these have become unproductive.
II. The teachers of these schools should immediately be retrenched.

Q8. If there is point Y which is 3m west of Point R. Then Y is in which direction from point S?
(a) South-West
(b) North-west
(c) West
(d) Cannot be determine
(e) None of these

Q9. Point R is in which direction with respect to point P?
(a) South-West
(b) North-west
(c) South-East
(d) North-East
(e) None of these 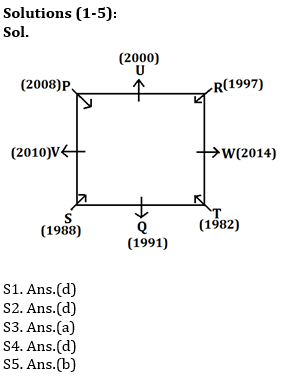 S6. Ans.(e)
Sol. The problem is that despite an increase in staff strength, the Institute has failed in its objective of implementing its plan. So, either there should be reasons for the lacking or the plans are a failure and must be revised for practical implementation.

S7. Ans.(d)
Sol. Clearly, the situation demands that efforts be made to remove the lackings in the present system of education and adequate measures be taken to improve the performance of students. Harsh measures as those given in I and II, won’t help. So, none of the given courses follows. 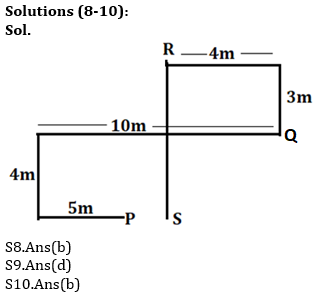