Q4. A likes which of the following sports?
(a) Cycling
(b) Camping
(c) Sky Diving
(d) Scuba Diving
(e) Rafting

Directions (6-10): Study the information carefully and answer the questions given below.
Eight persons P, Q, R, S, T, U, V and W are going for holidays on two different dates (13th and 22nd) in four different months i.e., January, March, April and May. All information is not necessarily in same order.
Q goes in April. Three person goes between Q and T. Equal number of persons goes after T and Before R. More than one person goes between R and S who does not goes on odd number date. One person goes between P and W. Equal number of persons goes after V and Before U who goes on odd number date. P does not go in the month of Q. 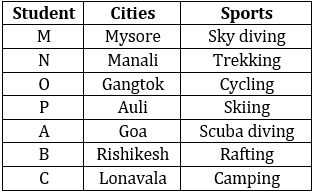 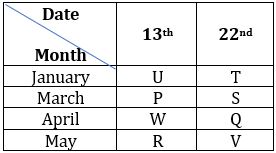 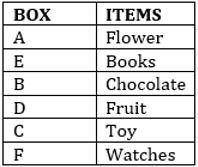