SBI has released SBI Clerk Notification 2020 to recruit 8000+ candidates for the post of Junior Associate. As per the official notification, SBI Prelims Exam is to be held in the month of February and March. We will provide you daily reasoning quizzes and a study plan to enhance your preparation. Today’s quiz based on- Puzzle and Syllogism.

Directions (6-8): Study the following information and answer the given questions:
In a family of seven members, there is only two married couple. A is daughter of B, who is husband of E. D is married to C, who is sister of A. B has no son. E is grandmother of F. G is the only daughter of D. F is the son of C.

Q9. Pointing to a lady, Sumit says to his only son, “She is daughter in law of my mother’s daughter in law”. Sumit is the only Child of his parents. How is the lady related to Sumit?
(a) Sister
(b) Brother
(c) Daughter-in-law
(d) Wife
(e) Daughter

Q11. Statements:
Some Silent are Listen.
No Good is Silent.
Only a few Listen is Best.
Conclusions:
I. All Best is Silent is a possibility.
II. Some Listen is not Good
(a) Only I follows
(b) Both I and II follow
(c) Only II follows
(d) None follows
(e) None of these

Q13. Statements:
All Cabin are Office.
No Office is Social.
All Cabin is Media.
Conclusions:
I. Some Media is not Social
II. All Social is Cabin.
(a) Only II follows
(b) Both I and II follow
(c) Only I follows
(d) Either I or II follows
(e) None follows 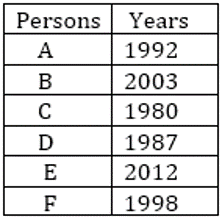 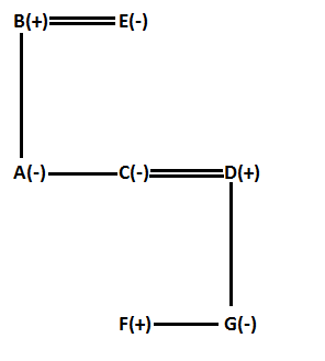 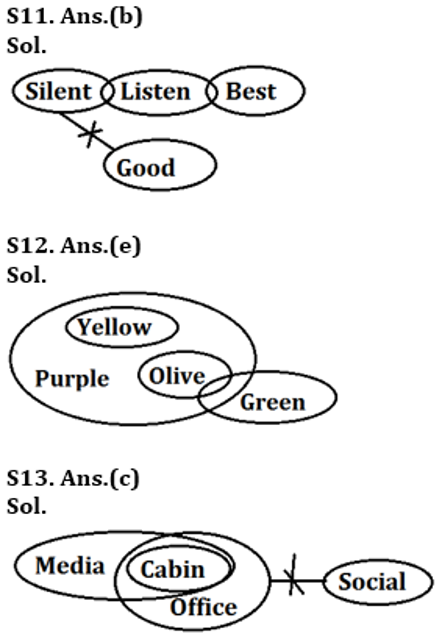