24th January 2020 Reasoning Quiz based on the most important topic which is asked in SBI Clerk Exam i.e Puzzle, generally 15-20 questions asked from this topic. SBI Clerk Prelims exam schedule on tentatively February/March 2020. For more preparation, you can also follow the SBI Clerk Study Plan for prelims which are provided on Bankersadda.

Directions (6-10): Study the information carefully and answer the questions given below.
Seven persons are sitting in a row, in such a way some are facing south while some are facing north. More than three persons are sits left of R, who does not sit at any extreme end. T sits third to the right of V. R is facing north direction. More than two persons are sits between V and R. Q sits third to the left of P, who sits one of the extreme ends of the row. Three persons are sitting between S and U, who is not an immediate neighbour of V. Immediate neighbours of T facing opposite directions. U and T is facing same direction of P but opposite to S.

Directions (11-15): Study the information carefully and answer the questions given below.
There are eight employees i.e. A, B, C, D, E, F, G and H who are born in eight different months start from March to October of a same year. C is born in June. There is only one employee whose birth month is between C and B. E is born in last month of given data. H is born just before the month on which A is born but after C’s born month. F is younger than C but older than A. G is Younger than D. 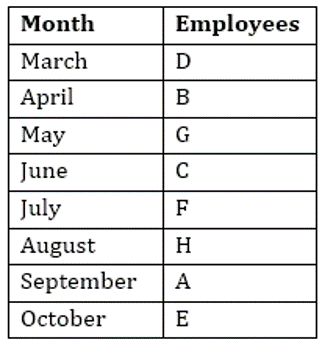