As per today’s scenario in the Banking exam even in other exams like SSC, it has become important that to solve a particular problem quickly you have to know the concept behind the question and also the way how to solve that problem quickly. Keeping in mind that thing we are providing here some important study notes and short tricks of various topics of Reasoning Ability so that a student can attempt more questions in less time (especially in Banking and SSC exams) and can make a higher probability of being selected. Best of hard work to all students. Keep using Bankersadda.
Here are the study notes of Reasoning Ability based on STATEMENT AND ASSUMPTIONS which will help you to ace your preparation.

This chapter plays an important role in the logical part of an examination. “2–3” questions come from this chapter in every “PO” level exam. Clear concept, right thinking, and sufficient practice can help you to do questions from this topic easily. Questions in this chapter consist of a statement (which consists of facts, observations, advertisements, appeals, advice, notices) and followed by assumptions, of which the validity is to be checked.

The format of question:-

Assumption:- An assumption is the hidden part of the statement which is assumed/supposed and taken for granted. Something that is not clearly mentioned in the statement, but is an integrated part of it. when somebody says something he does not put everything, every aspect of his idea into words. There is a lot which he leaves unsaid. That which he leaves unsaid, that which he takes for granted, may be defined as an assumption.
For example:- Let’s take an example of a five-story building made of glass and steel pillars. Now, the glass, the steel pillars can be clearly seen, but the foundation or base of the building is hidden or not clearly seen. This analogy can be used to explain the question type. The glass, pillars which can be clearly seen are parts of the building. This building is the statement of the question. On the other hand, the foundation is the hidden part, not clearly seen, which is the assumption. So, the assumption is the hidden or the implicit part of the statement without which the statement cannot exist.
Important Notes:-
(1) Always check whether an assumption is implicit or not by “keeping yourself in the shoes of the subject”.
(2) Think from the perspective of the person saying the line in the statement, the person giving the advertisement, the person advising someone etc.
(3) Always be careful of the keywords used in the sentence, such as, most, only, all, best, definitely etc. The statement are supposed to be read carefully to pick the right assumption.
→ As you know, in examination every second is precious.
So, now we are providing you some important key points which will help you to analyze the assumption in less time.
(1) Some words like only, each, any, every, all, question indicating words (why, what), answer indicating words (therefore), Definitely, But, Certainly exist in the assumption and that assumption will always be explicit (False)
(2) Some words like some, to large extent, many much exist in the assumption and that will always be implicit (True).
(3) Any assumption that is conveying the message of advertisement, notice and appeal, that assumption will always be implicit (True).
(4) Any assumption that’s talking about social welfare (positive), Govt. policies that assumption will always be implicit (True).
(5) If any assumption showing the word like the suggestion, order, request that will always be implicit (True).
→ Now we are providing you some example for better understanding:-
Statement:-
(1) “We offer the best training in the field of computers” –an advertisement.
Assumptions:-
I. People are interested in getting training in computers.
II. People want the best training.
Solution:- Since an advertisement offers “best training” in the field of “computers”, it must have been assumed by the advertisers that people want “computer training and that they want the “best training”. So, both assumptions are implicit.
(2) Statement:-
An advertisement in a newspaper – “wanted unmarried, presentable matriculate girls between 18 and 21, able to speak fluently in English, to be hired as models”.
Assumptions:-
I. Fluency in English is a prerequisite for good performance a model.
II. Height does not matter in performing as a model.
Solution:- Since the advertisement wants girls “able to speak fluently in English” it must have assumed that fluency in English is a requirement for a good model. But height as a criteria is not described in the statement so, the only 1st assumption will implicit.
(3) Statement:-
“Hungry stomachs do not understand high values and economic ethics. They will vote for a man who gives them rice”. – A political analyst on why a particular party won the election.
Assumptions:-
I. A lot of people are hungry.
II. Rice was not available previously.
III. Rice was available only in limited quantity.
Solution:- The analyst talks of hungry stomachs, so people with hungry stomachs must be existing. It means that 1st is implicit. II is not implicit although it looks otherwise. Some rice must have been available only in limited amount (otherwise people wouldn’t have been hungry). Hence, III is implicit.
(4) Statement :-
“Why should we not protest ? When we ask for drinking water they give us Pepsi and Coca-Cola”. –A politician in an interview.
Assumptions :-
I. Only drinking water is good for people’s health.
II. Providing people with drinking water is more important than providing Pepsi and Coca-Cola.
III. Pepsi and Coca-Cola do not contain healthy drinking water.
Solution :- Only IInd assumption will implicit.
Politician consider drinking water more important than Pepsi and Coca-Cola than only he shows anger. And 1st and IIIrd cannot be assumed because in 1st assumption “only” is mentioned and we cannot assume that Pepsi and Coca-Cola do not contain healthy drinking water.
(5) Statement :-
Students at school ‘A’ must get a better education than students at school ‘B’ because the grade point average of students at school ‘A’ is higher than that of students at school ‘B’.
The claim above depends upon which of the following assumptions?
I. The average grade earned by students is a good measure of the quality of education that a student’s receives.
II. Extracurricular activities at school ‘A’ are given more emphasis than at school ‘B’.
III. The grading standards at the two high schools are roughly the same.
Solution :- The conclusion about better education at school A is made by comparing the grades. But grades in the two schools are awarded separately. Hence the conclusion couldn’t be valid unless it was assumed that the grading systems of the two schools were alike. Hence III is implicit. Now if better grading means better education, I is implicit. II is not because nothing is mentioned of extra – curricular activities.
We have given our best to make you understand the concept of “Statement and Assumptions” with some different examples with their explanation. Hope you will be able to get things clear. 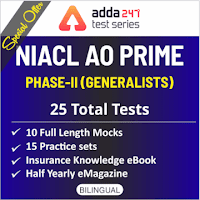