We are providing you with the test of the day which will help you in upcoming exams like IDBI Executive 2018. From this, you can practice questions with the timer that will help you to improve speed. IDBI Executive Exam 2018 is one of the biggest opportunity for you guys to grab on, set you own mark and proceed with full confidence. All the very best for your preparations and All the future exams.

Robin
Govind
Ramesh
Can't be determined
None of these
Solution:

Q2. If Nikita > Lalit and Rashi < Nikita then which of the following symbols should be placed in the blank spaces respectively (from left to right)? Priya < Rashi ≤ Shashi = Maya __Nikita=Kavita__Lalit

Q3. How many such pairs of letters are there in the word "STATIONMASTER" each of which has as many letters between them in the word as in English alphabet?

Eight
Nine
Ten
More than ten
None of these
Solution:

Q4. In a row of children facing North, Rajan is twelfth from the right end and is fifth to the right of Satyarthi who is tenth from the left end. Total how many children are there in the row?

Directions (6-10): The bar-chart shows the total number of students enrolled in different years from 2005 to 2009 in two projects P and Q, based on the bar chart solve the following questions. 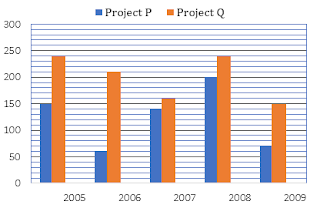 Directions (11-15): Rearrange the following five sentences (A), (B), (C), (D) and (E) in the proper sequence to form a meaningful paragraph and then answer the questions given below.

Q11. (A) A valid ‘Living Will’ facilitates passive euthanasia. A failure to legally recognize an advance medical directive inconveniences the “right to smoothen the dying process”, the court reasoned.
(B) It called passive euthanasia as a “mere acceleration of the inevitable conclusion.” Active euthanasia, the court concluded, is unlawful.
(C) In cases of terminally ill or permanently vegetative state patients, where there is no hope for revival, priority should be given to the Living Wills and the right of self-determination.
(D) Suicide involves “overt acts” which culminates in an unnatural death.
(E) The court distinguished passive euthanasia from suicide and active euthanasia.

Q12. (A) They had no idea what an elephant was, and so they decided, "Even though we will not be able to see it, we can feel it. Let's go."
(B) "Oh, no! it is like the branch of a tree," said the third man, touching the tusk of the elephant.
(C) One day the villagers were very excited, and when they asked what was happening they told them, "Hey, there is an elephant in the village today!"
(D) So, they all went to where the elephant was, and each of them touched it: "Hey, the elephant is a pillar," said the first man, touching its leg.
(E) "Oh, no! it is like a rope," said the second man, who was touching the tail.

Q13. (A) The previous winter having been unusually severe, this spring feeling was like a form of intoxication in May, as if there were an overabundant supply of sap.
(B) Everybody I met seemed to be smiling; an air of happiness appeared to pervade everything in the warm light of returning spring.
(C) One might almost have said that a breeze of love was blowing through the city, and the sight of the young women whom I saw in the streets in their morning toilets, in the depths of whose eyes there lurked a hidden tenderness, and who walked with languid grace, filled my heart with agitation.
(D) One morning on waking I saw from my window the blue sky glowing in the sun above the neighbouring houses.
(E) The canaries hanging in the windows were singing loudly, and so were the servants on every floor; a cheerful noise rose up from the streets, and I went out, my spirits as bright as the day, to go—I did not exactly know where.

Q14. (A) Sometimes he had flashbacks of sandstorms that used to whirl around the village, leaving behind a thick sandy layer all over the houses and even on his face.
(B) After settling down in the valley, he had adjusted to his new life by accepting the title of shepherd, something that he had never thought of doing before his forced immigration.
(C) Once the herd was settled, and busy grazing, he would sit down under his favourite tree and rest his head on the tree trunk and watch over the herd.
(D) It was his job to lead the herd to pasture and let them graze randomly on the lush green patches. (E) He would often daydream of his beautiful village in Afghanistan: he missed the giant, dry mountains that stood erect like soldiers, as if they were guarding the village.

Q15. (A) The tower is 324 metres (1,063 ft) tall, about the same height as an 81-storey building, and the tallest structure in Paris. Its base is square, measuring 125 metres on each side.
(B) Constructed from 1887–89 as the entrance to the 1889 World's Fair, it was initially criticized by some of France's leading artists and intellectuals for its design, but it has become a global cultural icon of France and one of the most recognizable structures in the world.
(C) The Eiffel Tower is the most-visited paid monument in the world; 6.91 million people ascended it in 2015.
(D) The Eiffel Tower is a wrought iron lattice tower on the Champ de Mars in Paris, France.
(E) It is named after the engineer Gustave Eiffel, whose company designed and built the tower.