Union Budget 2020-21 Key Highlights: The new budget for the new decade is here. Finance Minister Nirmala Sitharaman has started her Union Budget Speech in the Parliament. This is her first full time budget presentation. We have come up with big promises in her budget statement. The budget has something for everyone and it will be such that it will attend to weak, old and vulnerable citizens. The budget is aiming to boost growth and enhance purchasing power of people.

We have come up with the Official PDF of the Budget 2020-21 that will cover everything in a more enahnced way: 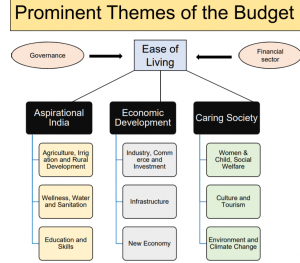 Expenditure taken up by Union Budget 2020-21 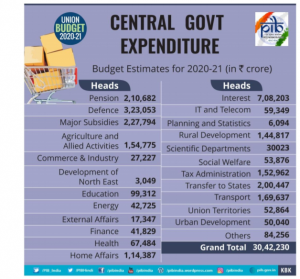 Budget At A Glance

Look at the Union Budge in a single official graphic nutshell: 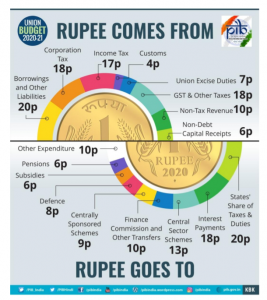 Nirmala Sitharaman pays homage to ‘visionary leader Arun Jaitley’ when she speaks about GST. She calls it “the most historic reform”. Lists out how economy has benefited as a result of GST- “the dreaded inspector raj” gone as a result of this GST – “integrated India economically”. 60 Lakh new taxpayer has been added, 40 crore returns, 100 crore e-way bills were generated.

Finance Minister is back with red cloth bahi khata to present the union budget, the second of the second edition of the Narendra Modi government amid economic turbulence.

Sabka Sath Sabka Vikas Sabka Vishwas was the tagline of government mentioned by Finance Minister Nirmala Sithraman in her speech today with listing few of the important aspects covered by the government. 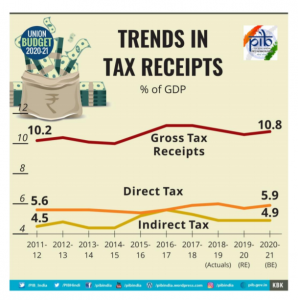 The tax rates are being simplified at both personal and coporate level. GST has already shown an increase in the 60 Lakh new taxpayer has been added, 40 crore returns, 100 crore e-way bills were generated. DDT (Divident Distribution Tax) is removed to attract more investment.

Look at the personal tax table below:

India’s foreign direct investment increased from a level from 12 per cent to almost double in the last 5 years. Central government debt has down to 48 per cent as of now from 52 per cent in March 2014. 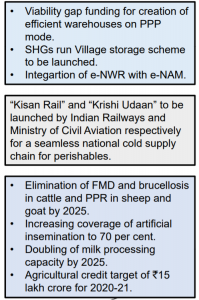 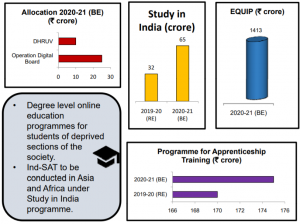 5 archeological sites to be developed as iconic sites with on-site museums.